Disney World is a magical destination and we’ve had dozens of wonderful trips there. I never thought much about hurricane season impacting a Disney World trip, but then the unexpected happened. Knowing Disney World’s hurricane policy is important when faced with this tough situation.

When Is Disney World’s Hurricane Season?

Atlantic hurricane season runs from June 1 until November 30 each year, but most major storms occur mid-August until late October. We’ve had many trips in this time frame and never had our travel interrupted. However, knowing more about Disney World’s hurricane policy, I will be more careful when booking another trip during hurricane season.

The official Disney World hurricane policy states: “If a hurricane warning is issued by the National Hurricane Center for the Orlando area—or for your place of residence—within 7 days of your scheduled arrival date, you may call in advance to reschedule or cancel your Walt Disney Travel Company Disney Resort Hotel Package and most room only reservations (booked directly with Disney) without any cancellation or change fees imposed by Disney.”

When I first read this policy it seemed very straightforward and reassuring. The afternoon before my trip I called to cancel my hotel reservation. However, I learned cancelling my reservation would incur a fee.

This is because when I called, the National Hurricane Center hadn’t yet issued a formal hurricane warning. Those warnings are usually only issued “36 hours in advance of tropical storm-force winds.”

I booked this trip directly with Disney World. This meant I couldn’t cancel my reservation without penalty, but I could change it based on availability. I was not able to secure the same hotel or room rate for my alternate dates, but changing my reservation didn’t incur extra fees.

Important note: If you made a reservation through a travel agency or other website you must contact them directly for their exact Disney World hurricane policy.

What Happens With My Disney World Tickets?

Disney World has a date-based ticket system where prices fluctuate based on your dates of travel. This means your Disney World ticket is tied to certain dates, which can be a problem when weather threatens those dates.

Technically this means you cannot change your Disney World tickets after they’ve been purchased. However, I was able to contact Disney World ticketing, and after 90 minutes on hold they agreed to move my Mickey’s Not So Scary Halloween Party ticket to a new date a couple of weeks later. If there had been a difference in price between the two party nights I would have been responsible for the additional expense.

Should I Avoid Booking A Disney World Vacation During Hurricane Season?

The short answer is no. Some of our favorite Disney World vacation memories have taken place during hurricane season. What I am suggesting is that you fully understand Disney World’s Hurricane policy before making your vacation plans. It is also wise to have travel insurance for extra peace of mind any time you travel, but especially in times where issues are more likely to arise.

A lot of people will feel this way. I planned for months to be at Disney World’s Galaxy’s Edge on opening weekend. My trip was perfectly planned and I did not want to lose my specially reserved experiences.

After reading several reviews of what people experienced during other Disney World hurricane events I knew that there was a decent chance the parks would close early or be closed all day depending on the storm’s arrival. This meant that all those perfect plans had a chance of falling through anyway.

Ultimately, I decided a less planned day at Disney World parks in the future would be better than sitting out a storm in a hotel. The decision was incredibly difficult, and I did worry if I had made the “right” choice.

Cost To Change My Disney World Trip To Avoid A Hurricane

Please note: This information is for illustrative purposes only and each person will incur a different cost.

The biggest expense I had was changing my Disney World hotel room. My preferred hotel on my alternate dates was not available. To change my dates I ended up in a slightly more expensive resort. This difference in cost ran me a little over $300 for the trip.

Our base park tickets were not impacted, since we are annual passholders. Our Mickey’s Not So Scary Halloween Party tickets were also modified to an alternate date with the same pricing as my original ticket, so there was no extra cost there either. I did have to spend about 90 minutes on hold to reach a ticket agent, so there was definitely a cost of time.

Southwest Airlines’ response reminded me why they are my favorite airline. Since Southwest had issued a travel advisory for my trip timeline I re-booked my ticket at no charge.

I had ordered groceries from Garden Grocer and was worried about a restocking fee for canceling the day before delivery. When I called, their customer service representative said that they understood the situation. I emailed my new resort and dates to Garden Grocer, and they moved the dates for no charge.

I hope you never need to change your Disney World vacation to avoid a hurricane, but now you know how to manage this situation. Ultimately this decision is a very personal one that each family must make for themselves.

I was disappointed to change our Disney World trip dates, but there was limited out-of-pocket cost. As long as I was willing to reschedule instead of cancel our Disney World vacation, companies were very accommodating. Changing our trip to avoid a hurricane at Disney World cost me some money and time, but bought me peace of mind. 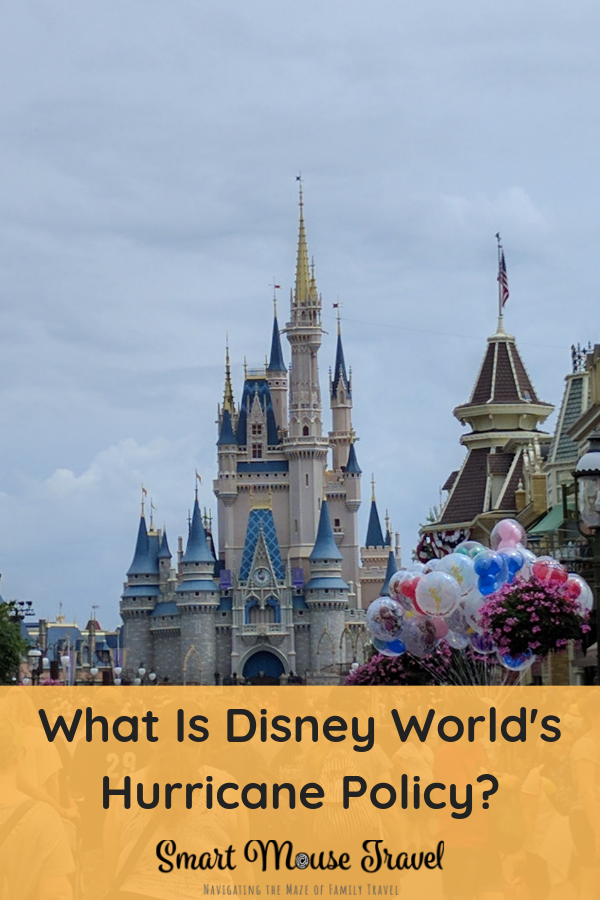