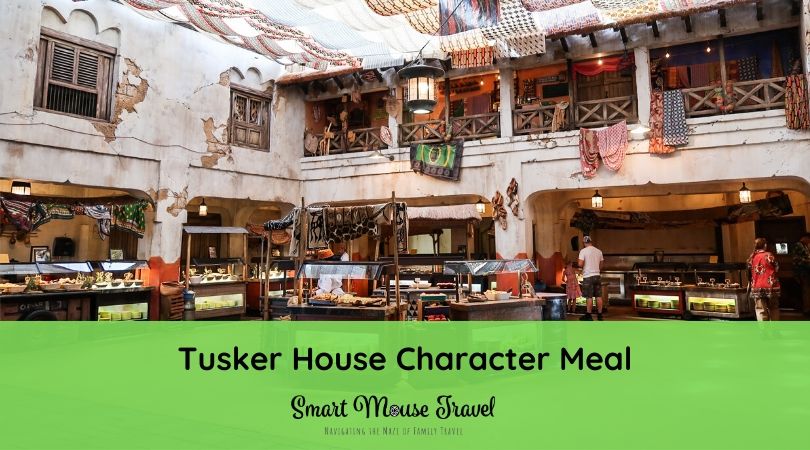 Disney’s Tusker House is located in the Africa area of Animal Kingdom not far from the Festival of the Lion King theater. 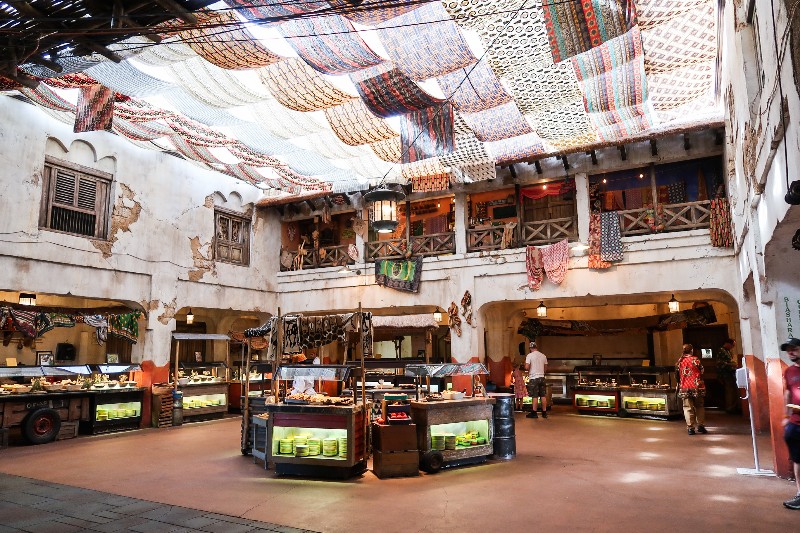 The check-in area for Tusker House character meals is tucked away in the back of Dawa Bar. Cast members check you in at a small podium and ask for your mobile number. Then Tusker House sends a text message when your table is ready. This gave us a few minutes to watch the incredible Harambe Village Acrobats while our table was prepared.

Entering into Tusker House you are transported to an African village market. Colorful cloth is draped overhead and each of the buffet stations looks like a food stand. There are several dining areas within Tusker House and the characters rotate through each dining room. 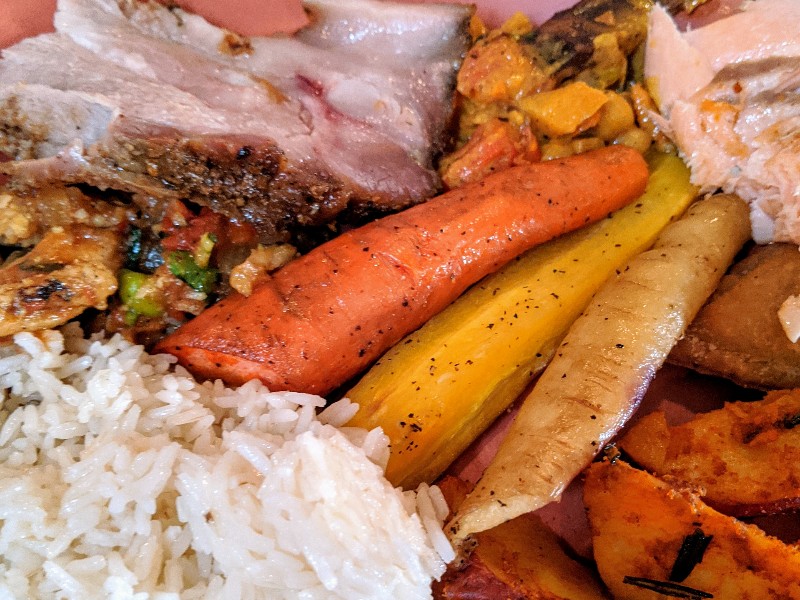 The Tusker House breakfast menu is a basic assortment of traditional breakfast items. However, there is a lot of variety on the Tusker House character lunch and dinner menu. Choose from simpler foods like spit-roasted chicken and roasted pork or try something different with some of the curries, mini samosas, or Peri Peri whole salmon.

The kids section has lots of American staples like mashed potatoes, mac and cheese, deli meat, cheeses, corn dogs, and chicken drumsticks. We saw lots of kids and adults enjoying these more traditional American foods, but we loved the variety of the ethnic inspired cuisine. 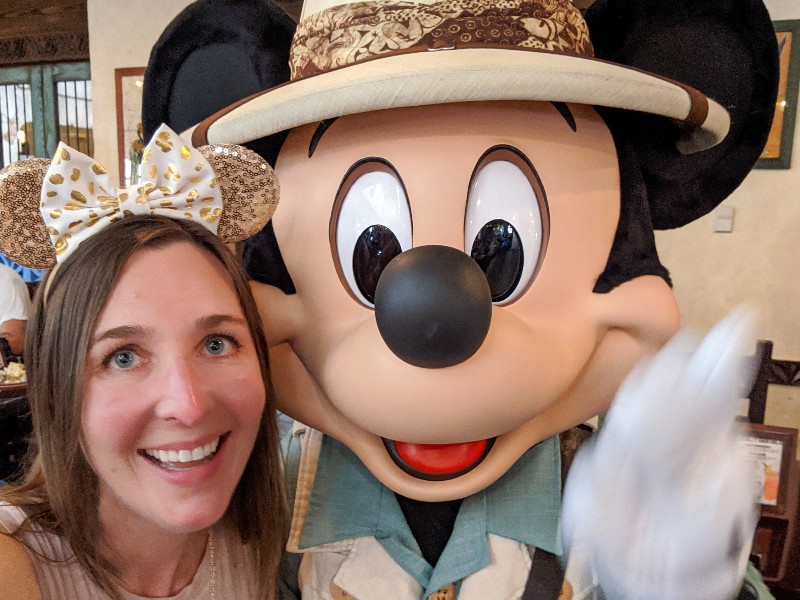 Please note that characters are subject to change without notice.

The four characters work through each of the dining rooms visiting each table along the way. During our meal we were pleasantly surprised that each of the characters stopped by more than once. The first time they stopped at the table we had them sign our Disney character autograph ornament and had a large interaction.

Any time a character came back through the Tusker House dining room after that, they would usually do a quick wave before moving to the next table. During a Tusker House character meal, the characters invite kids to parade around the restaurant shaking noise makers with them. 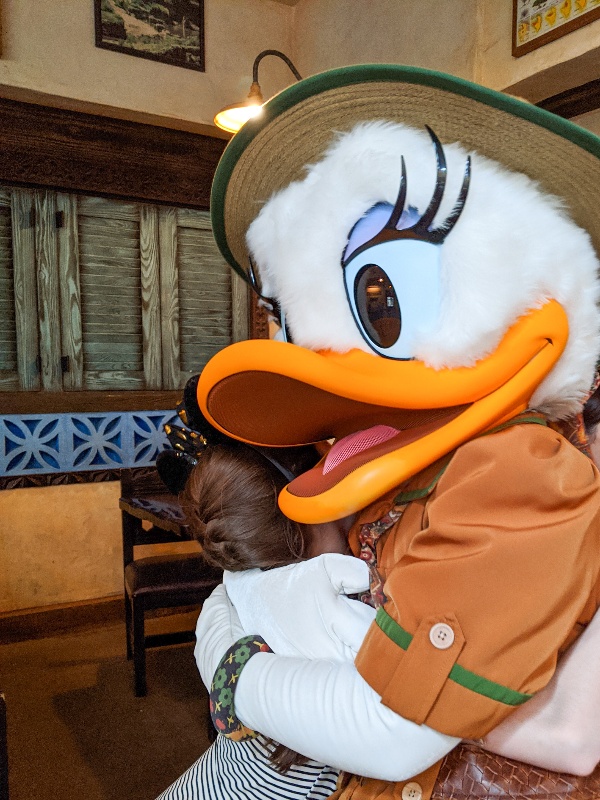 We opted for a late lunch Tusker House character meal reservation. This 3:15pm time slot worked out great since most of the lunch crowd had already left and early dinner guests had not arrived yet.

Daisy sashayed her way over to our table and happily showed us her safari chic accessories. A straw hat with a dangling bow, a scarf tied around her neck, and a cute bangle bracelet made Daisy’s safari look adorable.

Daisy happily signed our Disney character autograph ornament before she moved on to the next group of adoring fans.

Donald Duck is always a ham no matter when you see him. He kept covering up Elizabeth’s face when we were taking pictures. One of the best things Donald did during our meal was his laser focus on Daisy. When Daisy was near Donald he would stop, spend a moment with her, and sometimes they would give each other a kiss. It was adorable.

Unlike Donald, Goofy kept accidentally covering Elizabeth’s face with his ear during pictures. After a moment he decided a quick dance would be a much better use of their time together.

We told Mickey that we appreciated him signing our special ornament as a way for us to remember our time together. After signing, Mickey used his hands to draw a big heart for both Elizabeth and me to show he loves our time together, too. 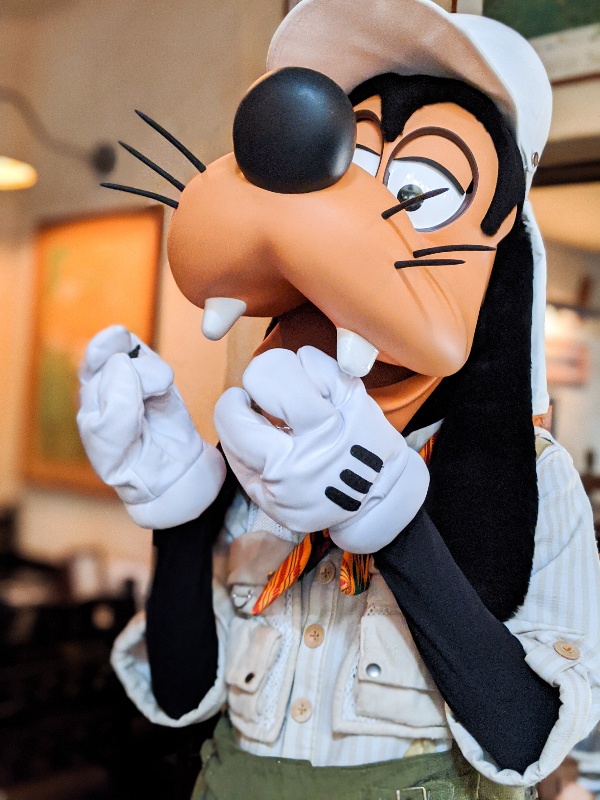 Our Tusker House character meal experience was great. The characters moved through the restaurant efficiently, but still gave each table plenty of time for a meaningful character interaction. The ethnic inspired food was better than many other character meal buffets we’ve attended, but there is also plenty of traditional American food for less adventurous eaters. 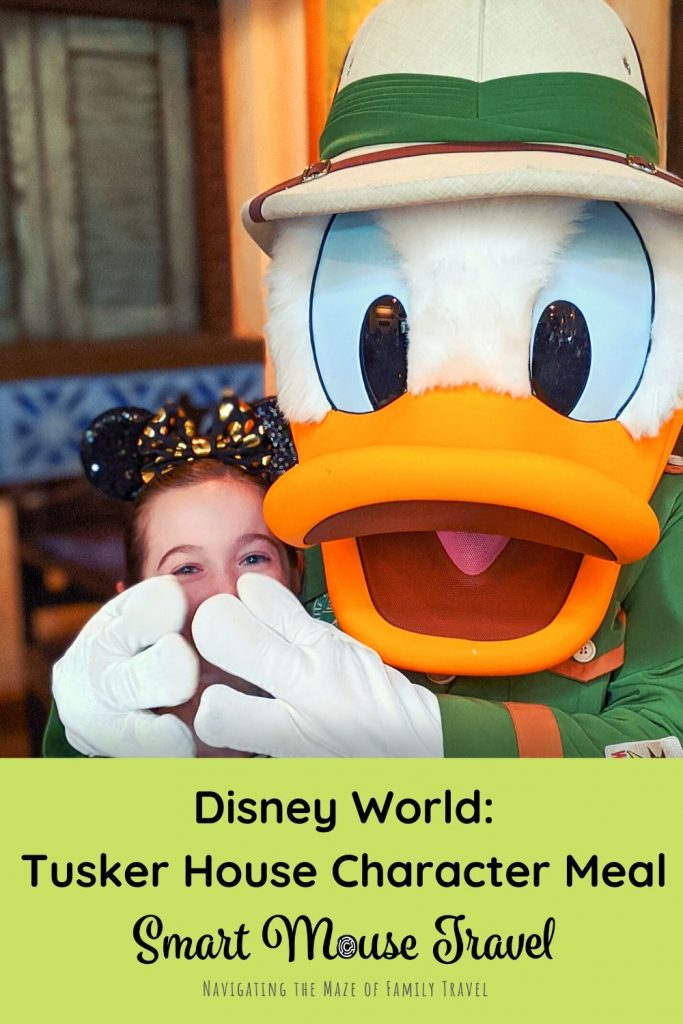