Disney’s Grand Californian Hotel is the newest and most perfectly placed of the on-site hotels at Disneyland. It is just a short walk to Disneyland Park, and there are even special entrances to Downtown Disney and Disney California Adventure directly from the resort property. Not surprisingly, all this luxury and convenience come with a matching price tag. Find out more about our stay at Disney’s Grand Californian Hotel Deluxe Studio Villa, the resort itself, and how we rented our villa for a fraction of the standard rate. 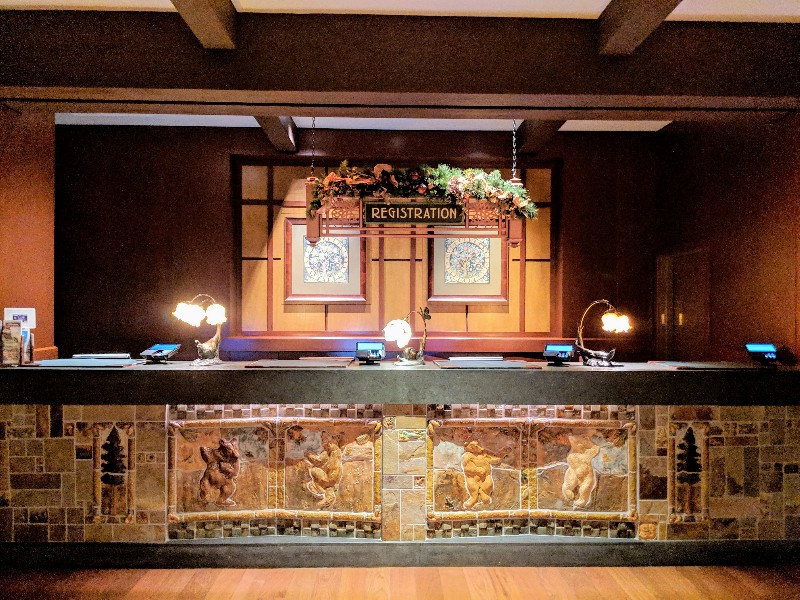 There is plenty of comfortable seating and an area for kids to watch some Disney classics while you check in to the resort. If live music is more your thing, keep an eye out for a pianist to sit down and play Disney classics at the grand piano in the lobby.

One side of the lobby holds a grand stone fireplace with several chairs clustered in front of it. This area reminded me of the fireplace at Disney World’s Wilderness Resort lobby when we stayed at Copper Creek Villas. 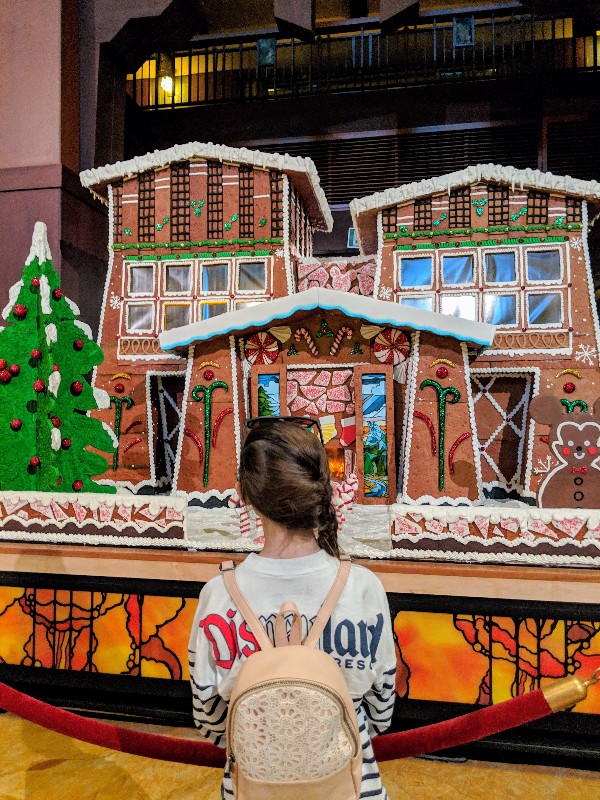 A huge and intricately decorated gingerbread house is at one end of the lobby and in the center of the lobby is a multi-story Christmas tree. The Christmas tree is decorated in a mix of yellow and white lights. The ornaments are an assortment of large ball ornaments, flowers, and beautiful stained glass lanterns. 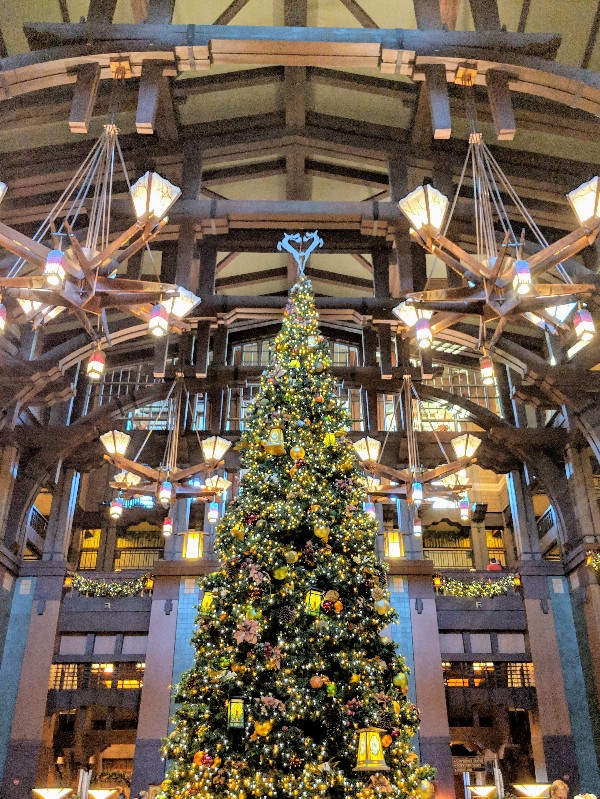 Planters with birch limbs and greenery are all throughout the resort, and lit pine garland adorns some of the higher levels of the lobby. Santa Claus and live carolers both stop by the Grand Californian lobby during the holidays to give the hotel an even more festive feel. 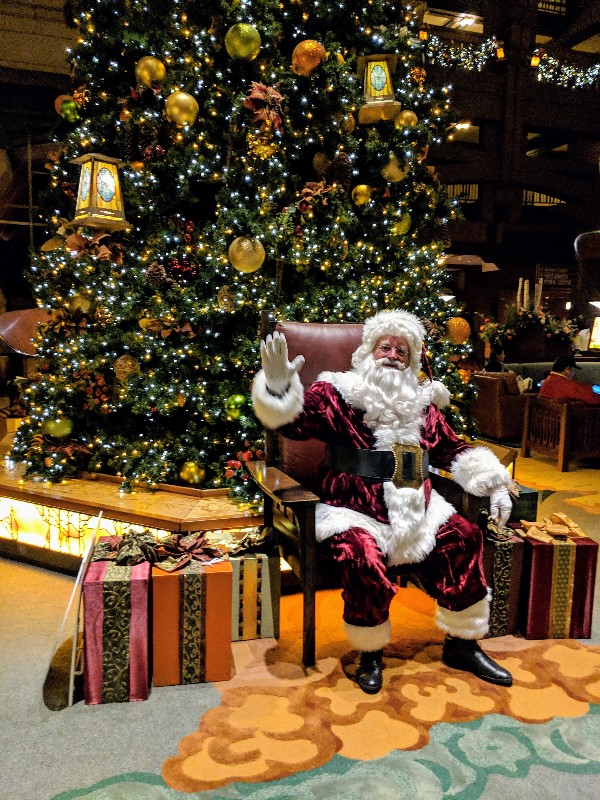 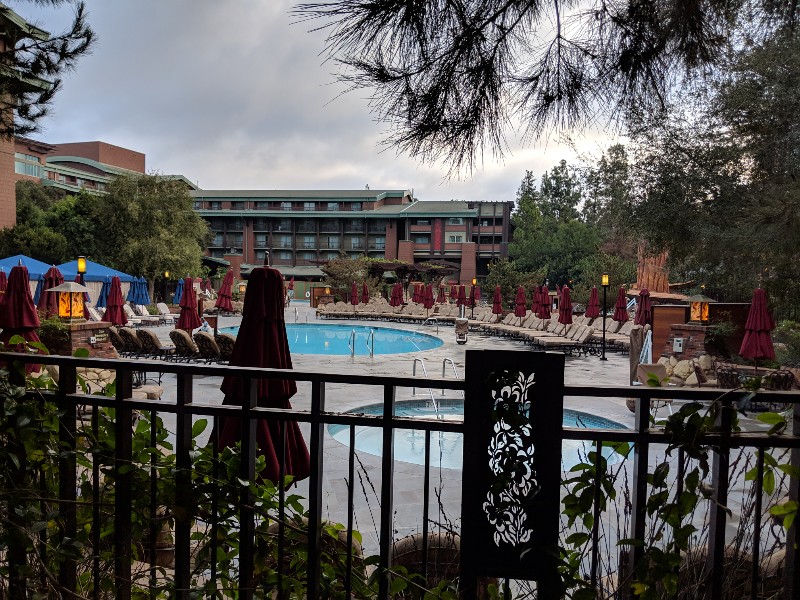 There is one pool area at Disney’s Grand Californian Hotel, but several different pools within the one area. The Fountain Pool, Mariposa Pool, and Redwood Pool are all located just steps away from one another.

The Redwood Pool is where you find a 90-foot (30-m) water slide for adventurous swimmers. This water slide curves around a giant Redwood stump before dropping you in the pool. Cabanas are also available to rent if you want an extra relaxing visit to the pool.

There are a couple of dining options at Disney’s Grand Californian Hotel, but with its easy access to Downtown Disney we opted to eat outside of the hotel. 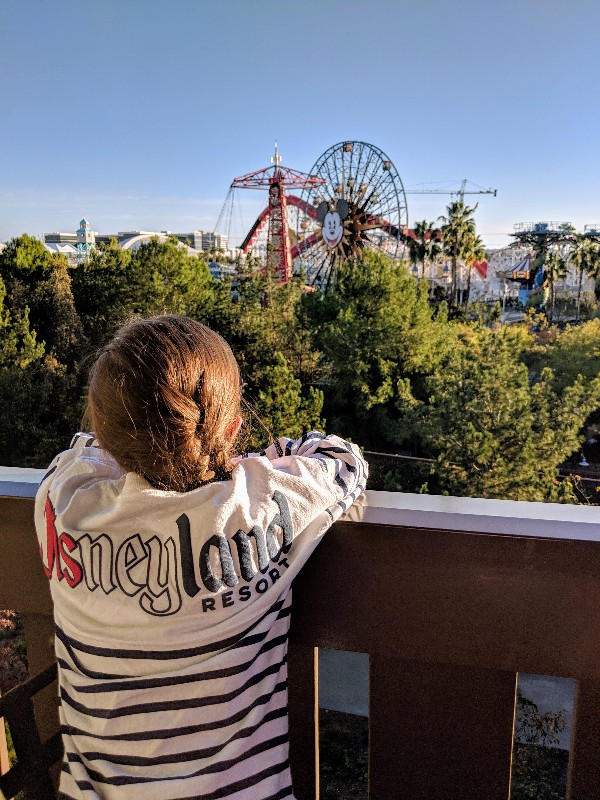 As soon as we entered our room we could see the amazing view of Pixar Pier at Disney California Adventure from our balcony. The Grand Californian Hotel Deluxe Studio Villa can have a variety of views, but we were lucky to get a theme park view.

Once you enter the Grand Californian Deluxe Studio Villa the kitchenette is on one side and the bathroom is on the other. 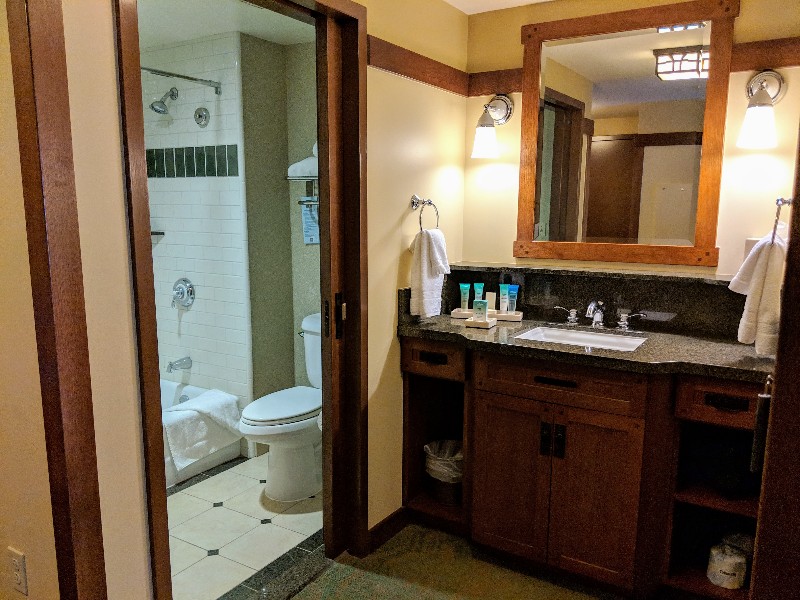 The bathroom in the deluxe studio villa is split into two distinct sections of tub/toilet and sink areas. The shower/toilet area is closed off from the rest of the room by a space saving pocket door.

The sink and closet area are open to the rest of the room, but the opening faces the kitchenette on the opposite wall instead of the beds. If you have read other room reviews from me you know that I am a big fan of split bathrooms. They allow our family to have multiple people get ready at once. 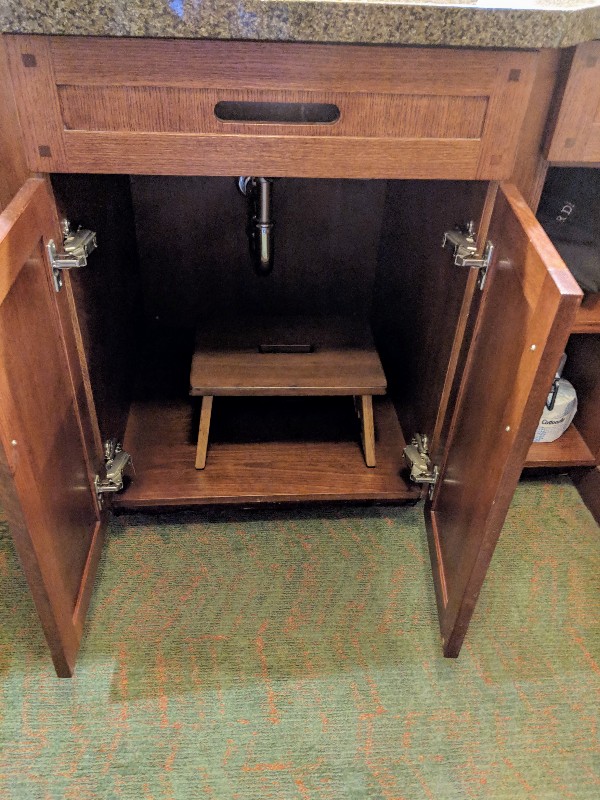 There was good storage under the sink and on the side of the bathroom vanity. This meant we had no trouble stashing our toiletries. A nice surprise was the step stool under the sink to help littler kids reach the sink easily. 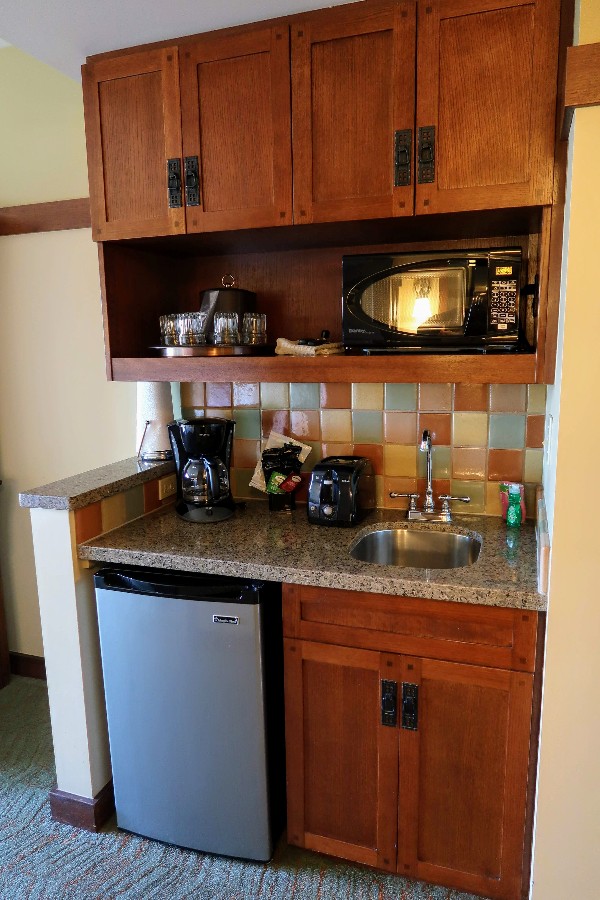 Deluxe Studio Villas have a small but functional kitchenette as opposed to a full kitchen found in the 1-, 2-, and 3-bedroom villa options. We did not plan to eat meals other than breakfast in our room, so the kitchenette was perfect for our needs.

The kitchenette came stocked with the following appliances: Mini-fridge with teeny freezer, a 10-cup coffee pot, microwave, and a toaster. There were also 4 real coffee mugs, 4 glasses, a corkscrew, and a can opener.

The room is also stocked with a dish cloth, dish towel, paper towels, and small dish detergent. Normally there are a handful of paper plates, paper bowls, and plastic cutlery sets in the cabinets of a deluxe studio villa.

However, our room didn’t seem like it had been fully restocked for our stay.  When we arrived we only had 2 plates, 3 bowls, and 3 cutlery sets. 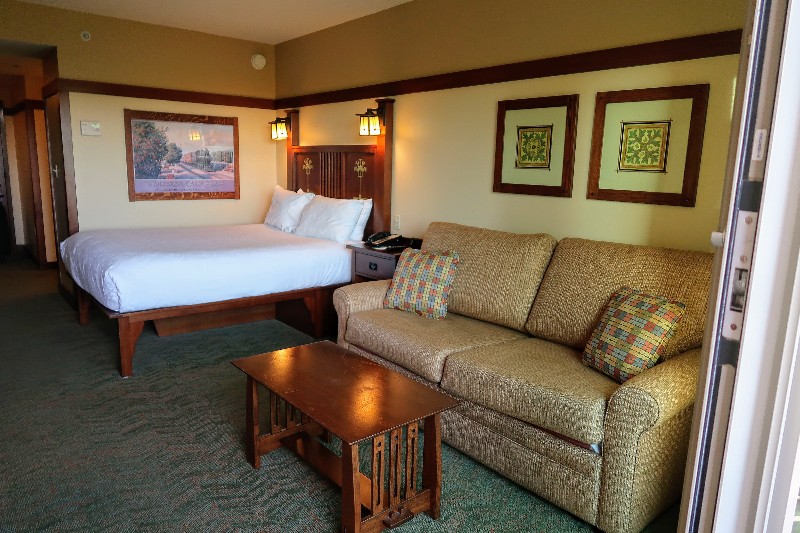 The bedroom area has the traditional studio villa setup with a queen-size bed and a queen-size sleeper sofa next to it. There is also a dresser that holds the TV and provides storage for clothing and other items.

Across from the fold-out couch is a heavy wooden table with two chairs. We always used the table and chairs for breakfast in the morning. We even figured out that the coffee table made a great bench seat for one of us. This way all three of us could be seated at the table at once. 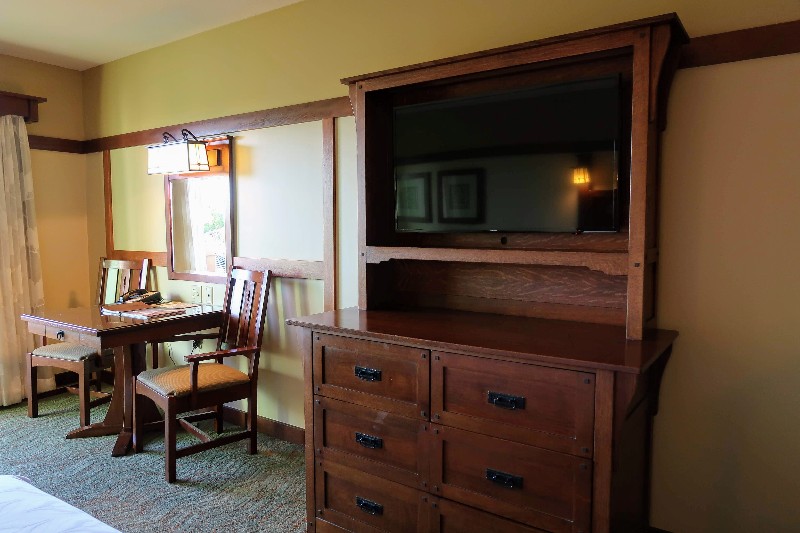 Just past the table and chairs is the sliding glass door to the balcony. The balcony has two patio chairs and one small side table. We all loved spending time on the balcony watching Disney California Adventure.

The room had the following great features:

Free WiFi is available for Disney’s Grand Californian Hotel guests at no charge. Disney’s free WiFi works well for checking email or social media accounts, but not for things like streaming video. 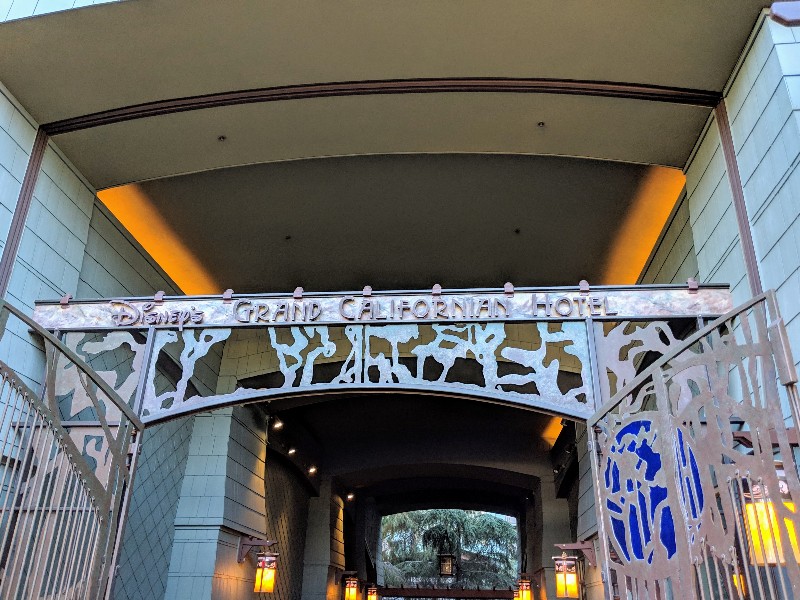 Transportation from Disney’s Grand Californian to Downtown Disney, Disney California Adventure, and Disneyland Park is not necessary because all three are an easy walk from the hotel.

The resort is gorgeous year round, but especially so over the holiday season. Our Grand Californian Deluxe Studio Villa was a spacious and functional room with thoughtful details and a wonderful view.

The location of Disney’s Grand Californian Resort is amazingly convenient. The easy access to Disneyland, Disney California Adventure, and Downtown Disney is a treat.

Our room had everything we needed for a comfortable stay, and the resort is beautiful. I would definitely recommend a stay at Disney’s Grand Californian if your budget allows. 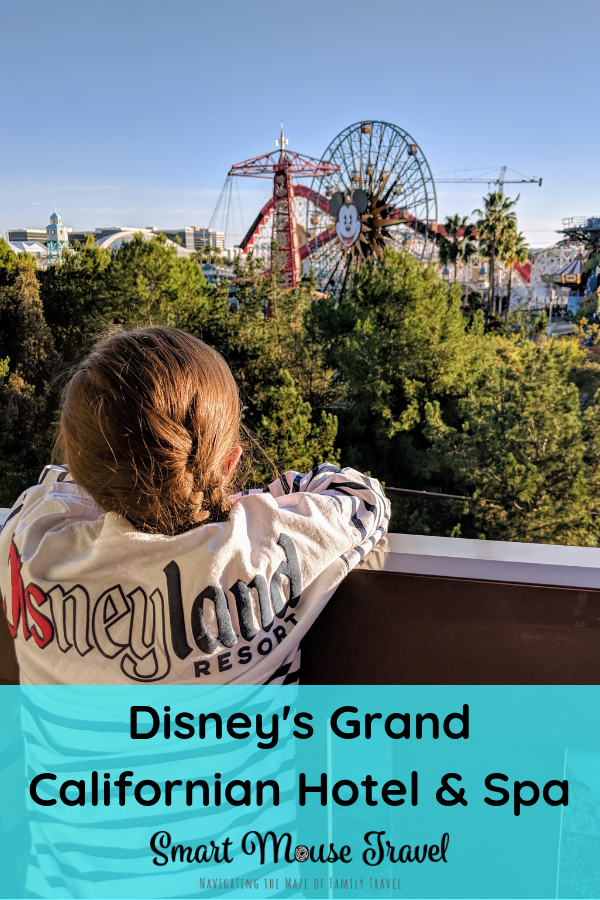