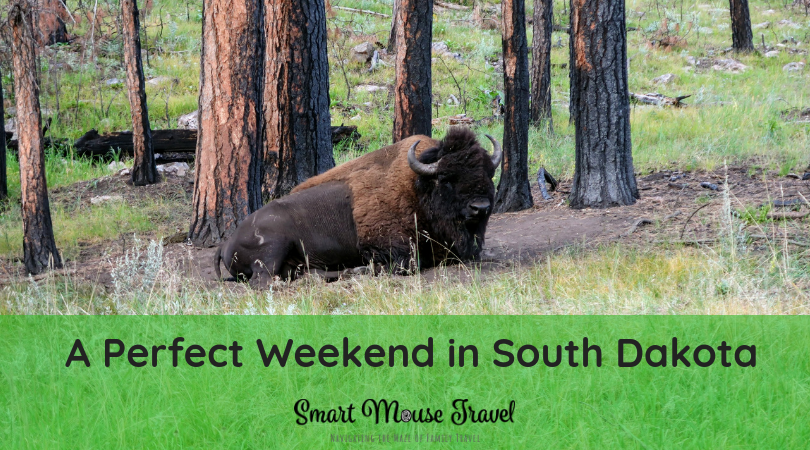 South Dakota was not at the top of my travel bucket list, but both my mom and mother-in-law have wanted to visit Mount Rushmore for years. The more I researched a trip to Mount Rushmore and surrounding areas the more excited I became about visiting South Dakota. I finally planned a girls’ South Dakota weekend trip and am so glad I did. Our South Dakota itinerary was perfect for a long weekend and even has a little extra on the agenda in case you have more time to visit. I will review the activities we liked best from our trip and then include our full South Dakota itinerary at the end of the article. 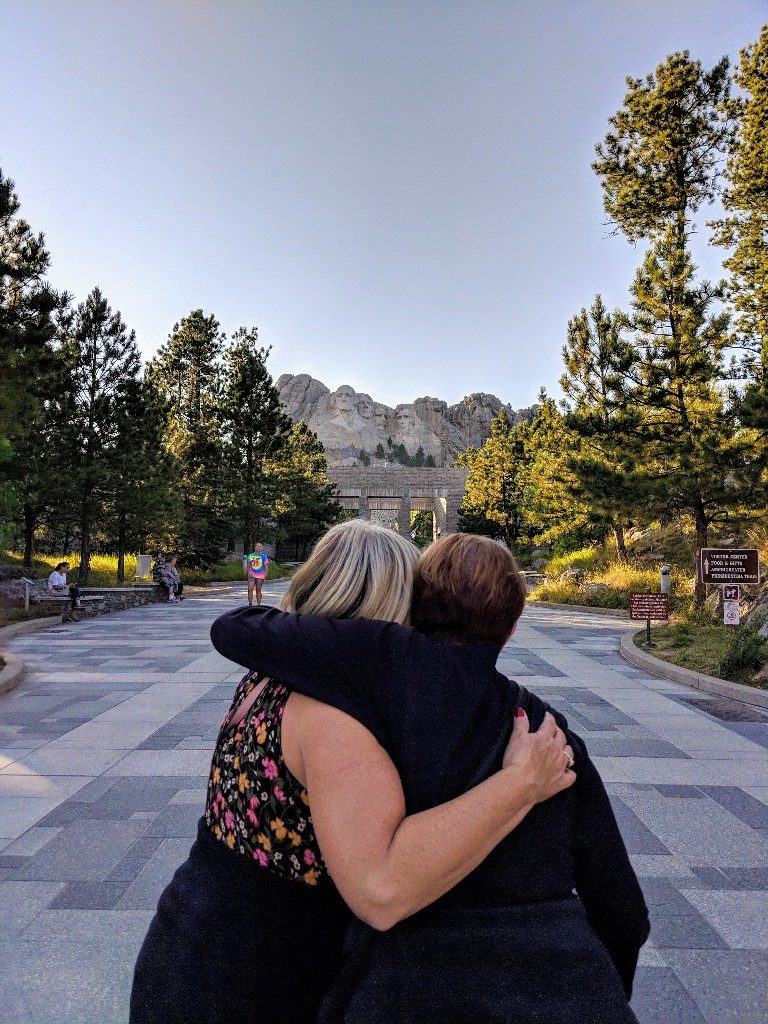 Thankfully our flight into Rapid City arrived on time in the early afternoon. We took the hour drive from Rapid City Airport into Custer, South Dakota. Although not the most direct route to Mount Rushmore, we decided to find our way to our cabin while we still had daylight. After dropping our suitcases we took the 30-minute drive to Mount Rushmore.

Mount Rushmore was really emotional for the moms. Seeing their reaction to this iconic piece of America was a special experience. I am incredibly grateful that I was there to witness this emotional event.

The monument itself is extremely impressive. We spent some time admiring it from the upper pavilion area before walking the Presidential Trail.

The Mount Rushmore Presidential Trail is an easy, short hike that takes you closer to the base of the mountain. There are some informational plaques and great photo opportunities along the trail. Don’t be afraid to ask other visitors to take pictures of your group.

We had worked up an appetite and grabbed a quick meal at Custer Carvers. Custer Carvers is one of several on-site food options in a large cafeteria at Mount Rushmore. Although the food was unremarkable, I could not have asked for a better view for our dinner. 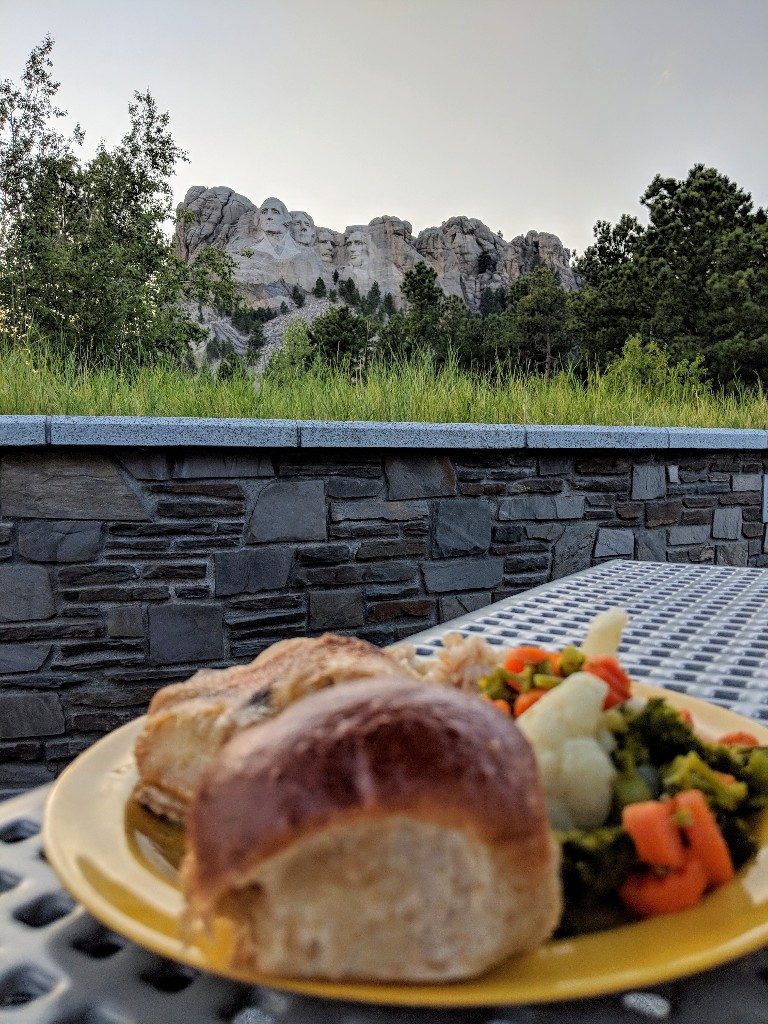 The evening program is a 10-minute ranger-led talk followed by a 20-minute video about Mount Rushmore and the featured presidents. Then Mount Rushmore is lit with bright lights while America The Beautiful plays. At the end of the program there is a touching thank you to servicemen and women.

I had no idea how emotional the evening program would be when I originally planned to attend. At the end of the program any veteran of the U.S. armed services (or a family member of those who have been lost) are invited to the amphitheater stage. The crowd cheered wildly to thank these members of the armed forces. Several of the veterans then participated in the flag removal ceremony for the night.

Pro Tip: I highly recommend trying to see Mount Rushmore in the afternoon and then sticking around for the evening program if possible. 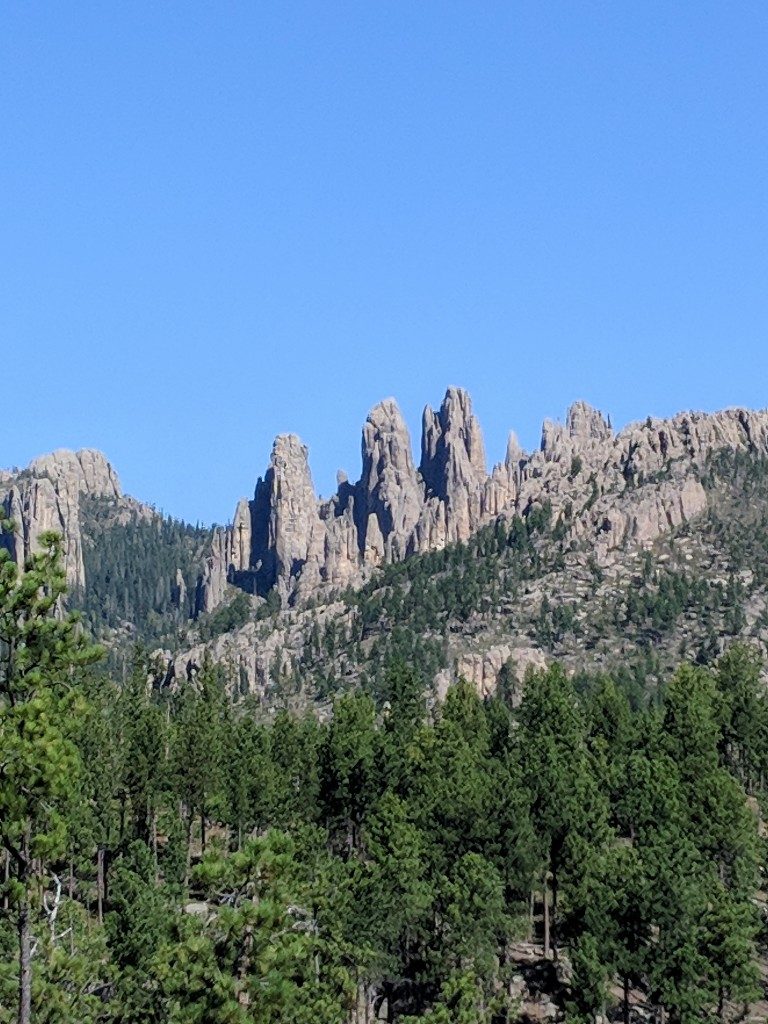 Needles Highway is a well-known drive in Custer State Park and will take at least an hour. We stopped at several overlook areas on Needles Highway to stretch our legs and admire the gorgeous views along the route.

The main draw of Needles Highway are the three incredibly narrow tunnels formed through the surrounding rock. There are 3 tunnels on Needles Highway: Hood Tunnel, Needles Eye Tunnel, and Iron Creek Tunnel. Each of these tunnels are extremely narrow with widths ranging between 8 feet 4 inches to 10 feet 6 inches (2.5 m to 3.2 m) and height clearances of 9 feet 10 inches to 11 feet 4 inches (3 to 3.5 m). 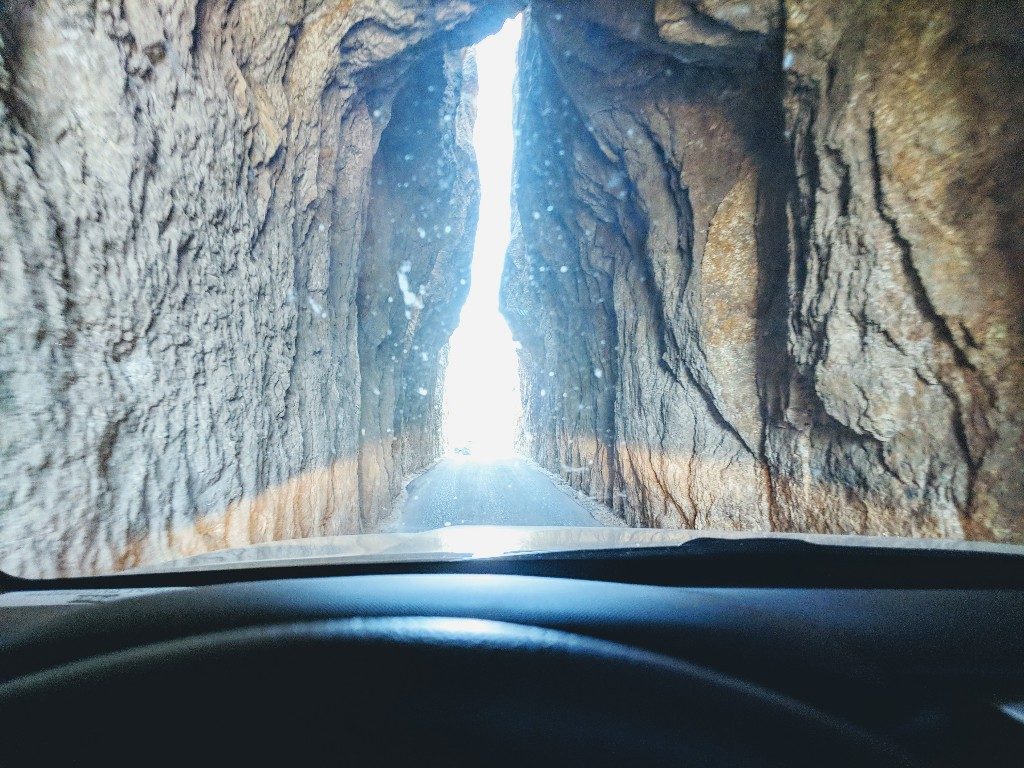 We entered Needles Highway from the southern entrance near Legion Lake Lodge. Entering Needles Highway here gave me a chance to acclimate to the winding, narrow roads for a few miles before reaching our first tunnel.

At the time the tunnels seemed narrow, but not scary. However, looking back at the videos and pictures I sometimes have a hard time believing that our rental Toyota 4Runner made it through. Be prepared for lots of blind corners and narrow roads along Needles Highway. This is also a popular motorcycle drive, so be extra mindful of motorcyclists.

At the end of our Needles Highway route was Sylvan Lake Lodge. This beautiful and rustic lodge was a great place to stop for lunch and a bathroom break. After lunch we walked around the lodge area to admire more views of Custer State Park before finishing the Needles Highway drive. 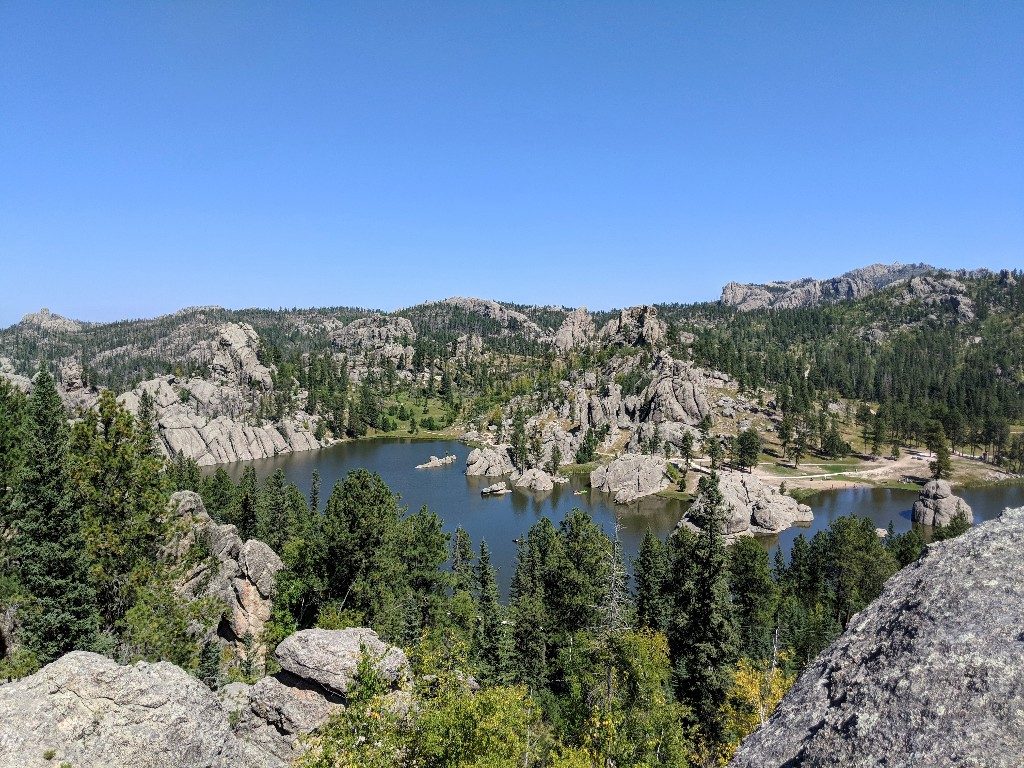 Pro Tip: Don’t rent a car that makes you feel uncomfortable driving. The rental service upgraded us to an Expedition, but I knew I did not want to drive narrow roads or pay for fuel in such a large vehicle so I refused the upgrade. 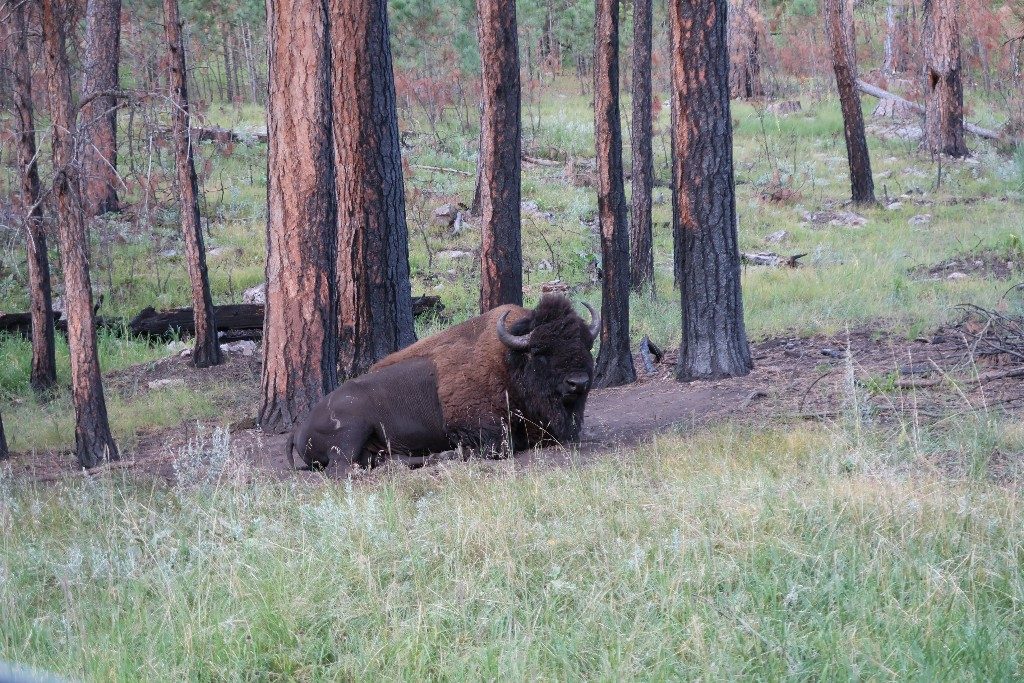 The Wildlife Loop drive makes a large circle through a prairie inside the park. Our drive along the Wildlife Loop got off to a slow start with only one or two animals, but then we found a huge herd of bison (also known as American buffalo).

On our drive around the Wildlife Loop we saw bison (buffalo), donkeys, pronghorn, wild turkeys, deer, and prairie dogs. Right before we rejoined the main road a gorgeous bison was resting along the side of the Wildlife Loop. He was stunning and seemed to pose perfectly just for us. 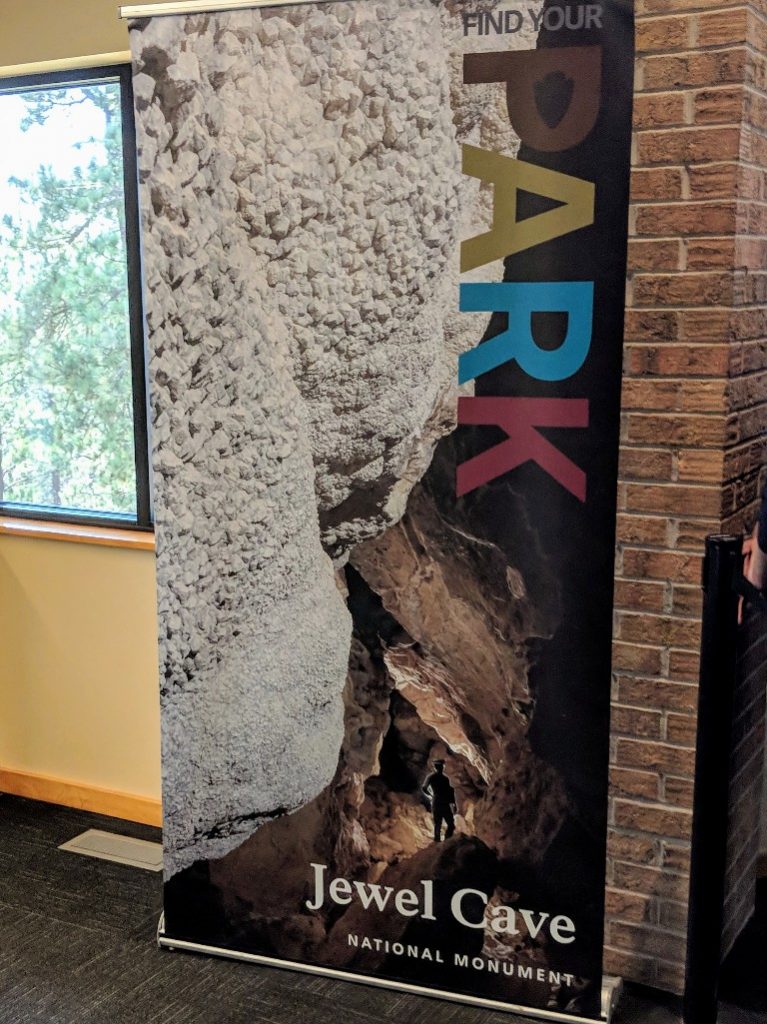 There are two popular cave systems in the Black Hills of South Dakota, Wind Cave and Jewel Cave. We opted for a tour of Jewel Cave National Monument, as it has several unique cave formations and is the third longest cave in the world with over 195 miles (310 km) of mapped passageways.

My mom and I have done cave tours before at Mammoth Cave in Kentucky, but this was a first for Elizabeth and my mother-in-law. We pre-purchased tickets for the Scenic Tour of Jewel Cave which is listed as moderately strenuous. After completing the tour, I agree with this activity ranking. The tour was a challenging workout for our multi-generational group.

The tour starts with your guide taking you down an elevator to the start of the path. During the tour you walk about a half mile and climb and descend 723 steps. This number of steps equals about 40 flights of stairs.

The Scenic Tour of Jewel Cave winds its way through several areas. During our tour we learned the difference between nailhead spar, dogtooth calcite, and even “cave bacon.” Our guide did a great job of explaining how the caves were formed and even educated us how the cave is still actively explored.

The Jewel Cave Scenic Tour takes about 80 minutes and really is moderately strenuous. If you pre-purchase your tickets, exchange your printed email confirmation for official tour tickets at the ticket booth before entering the visitor’s center.

The Town of Custer, South Dakota 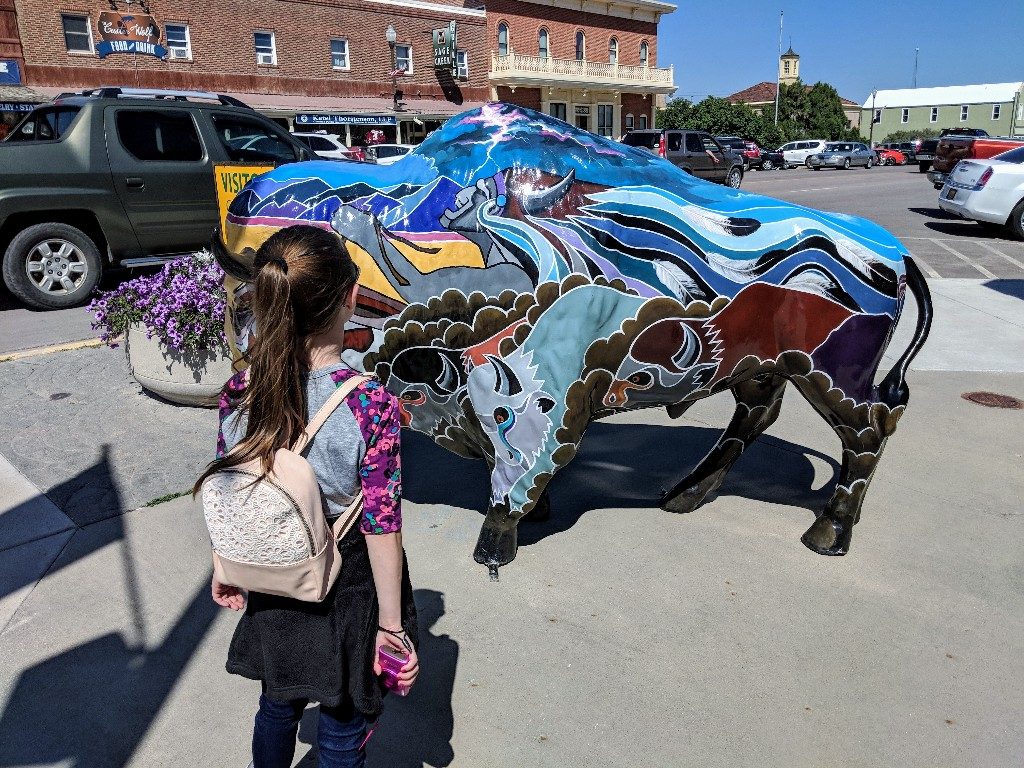 The home base for our multi-generational family trip to South Dakota was Custer, South Dakota. Custer is a small town with an easily walkable downtown area. There are several restaurants, coffee shops, and souvenir shops within just a few blocks.

We enjoyed our meals at The Begging Burro, Buglin’ Bull Restaurant, and Black Hills Burger and Bun Co.

Please note: Restaurants and shops close pretty early in Custer even during the summer tourist season.

During our weekend in Custer there was a Studebaker car show. We enjoyed walking around and admiring the classic cars. Another fun Custer activity was finding as many colorful buffalo statues as possible in town. The buffalo were located along Mount Rushmore Road and side streets in downtown Custer. These decorated buffalo each had a different theme and were impressive pieces of art.

I put together a video of our favorite South Dakota drives. See for yourself why these were such amazing and unique experiences.

Bonus South Dakota Activities If You Have More Time

Our weekend of activities in the Black Hills listed above was a perfect  South Dakota weekend itinerary. We saw a lot, but also had time to relax, enjoy the views from our cabin, and spend time together. However, bad weather in Chicago cancelled our flight home. Although a cancelled flight is never fun, we decided to make the most of our extra 24 hours in South Dakota with the following activities.

Make A Stop At Wall Drug 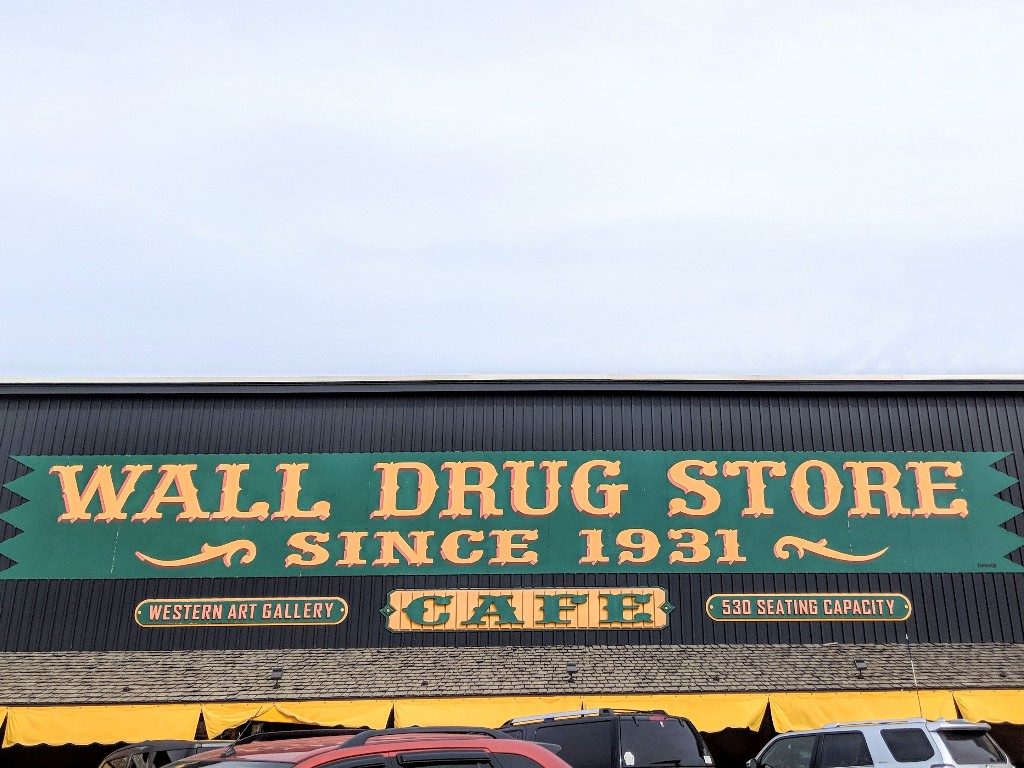 Have you ever seen a Wall Drug bumper sticker on a car and thought what the heck is that?! Wall Drug is a road trip mecca drawing nearly 2 million visitors each year.

This roadside attraction started in 1931 as a small drug store in Wall, South Dakota. Legend has it that to attract visitors the owners offered free ice water and 5-cent coffee with dozens of billboards along I-90. You can still grab 5-cent coffee and free ice water, but now Wall Drug offers a pretty eclectic assortment of items. 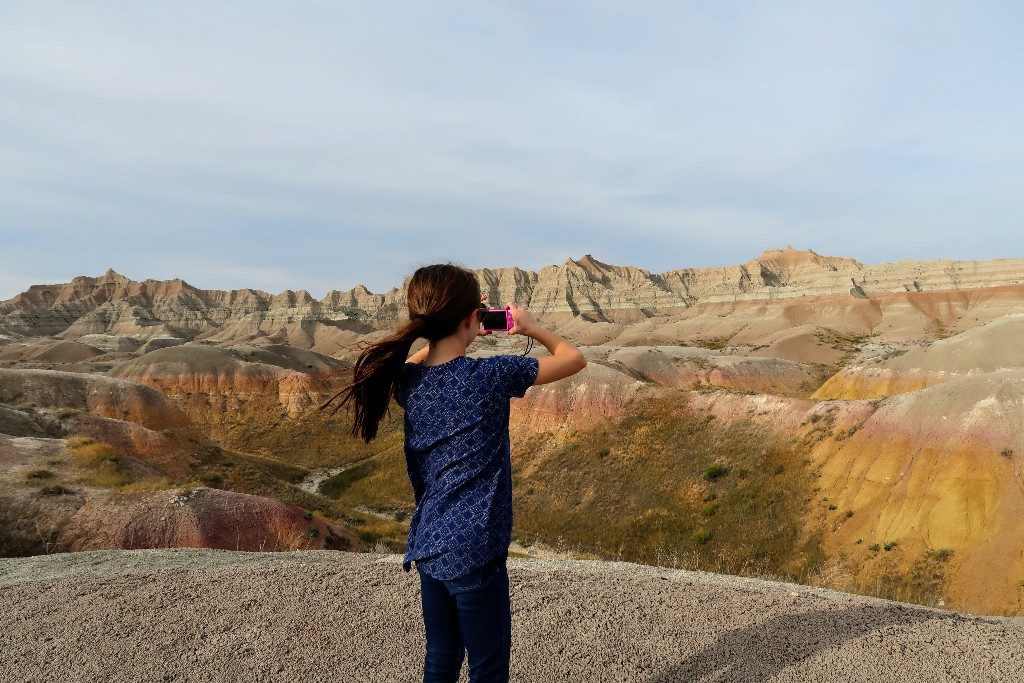 Badlands National Park encompasses almost 250,000 acres (1000 sq km) of towers, canyons, and tables of soft sedimentary rock. Each layer of the Badland buttes represents a different time period. The rock layers range from around 70 million years old on the bottom Pierre Shale layers to around 30 million years at the top of the Sharps Formation.

The Badland buttes erode at an average rate of one-third inch per year and is a treasure trove of ancient fossils. Driving the scenic Highway 240 loop wound us through the varying landscape. The tall spires and low valleys with their layers of colors were an impressive sight.

We stopped at a couple of scenic overlooks for pictures and also walked the Fossil Trail. The Fossil Trail is actually a raised deck walkway with informational signs about fossils that have been found in the Badlands. If you have time I highly suggest you get a Junior Rangers booklet to help your kids learn about Badlands National Park.

I struggle to describe the experience of walking on the crumbling sedimentary rock, the lines of color, and the wind blowing bits of the rock around us as we surveyed the park. If you have an extra day to explore South Dakota then I would recommend adding Badlands National Park to your South Dakota itinerary. 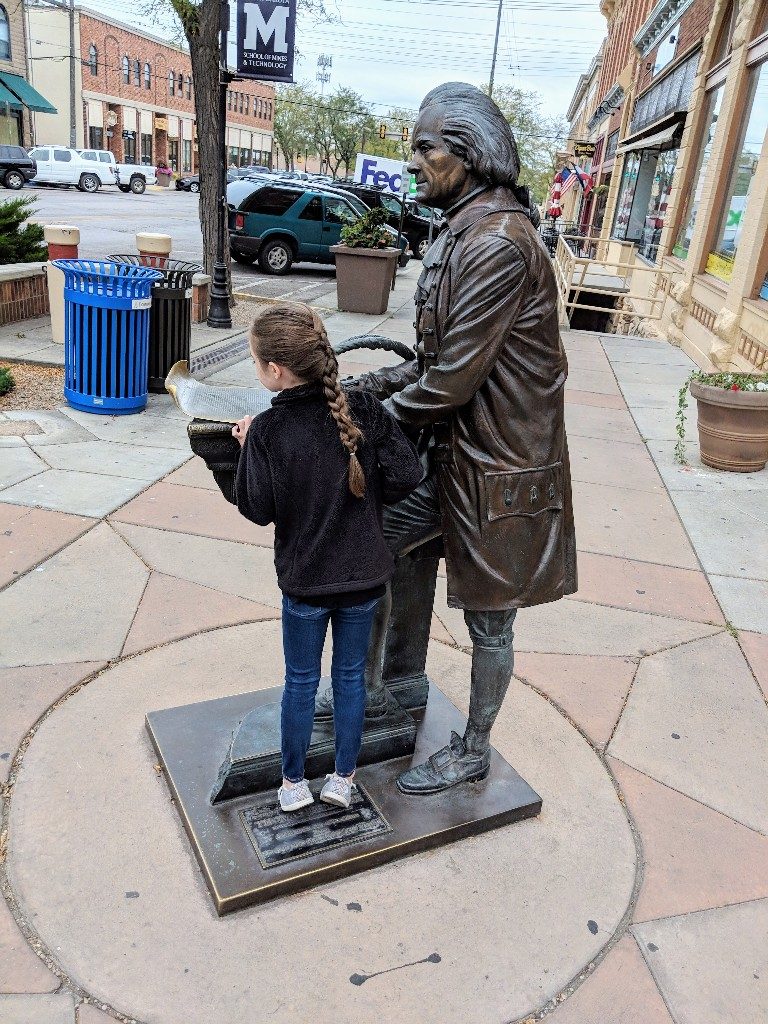 Tour The City Of Presidents

Since our flight had been cancelled and we couldn’t get home until the next evening we needed a last-minute place to stay in Rapid City. Thankfully Mr. Smart Mouse is a pro at finding me emergency hotel rooms, and Hotel Alex Johnson in historic downtown Rapid City was a surprise highlight of our extra night. That night while Elizabeth slept I looked for something to do before our flight home.

It was a lot of fun trying to guess the Presidents from far away, reading about their accomplishments, and posing with the statues. Overall it was a great way to spend a couple of hours before going back to the airport.

Final Thoughts On Our Multi-generational Family Trip To South Dakota

For a trip I wasn’t sure I wanted to take I have not stopped talking about our amazing family trip to South Dakota. Mount Rushmore is what brought us to South Dakota, but there is much more to see and explore. Custer State Park with the Wildlife Loop and Needles Highway drives, Jewel Cave, the town of Custer, Badlands National Park, and historic downtown Rapid City made for a trip of a lifetime for my mom, mother-in-law, daughter and me.

I cannot recommend a trip to South Dakota strongly enough. You can use my South Dakota weekend itinerary for a standalone trip like ours or incorporate it into a longer summer road trip. 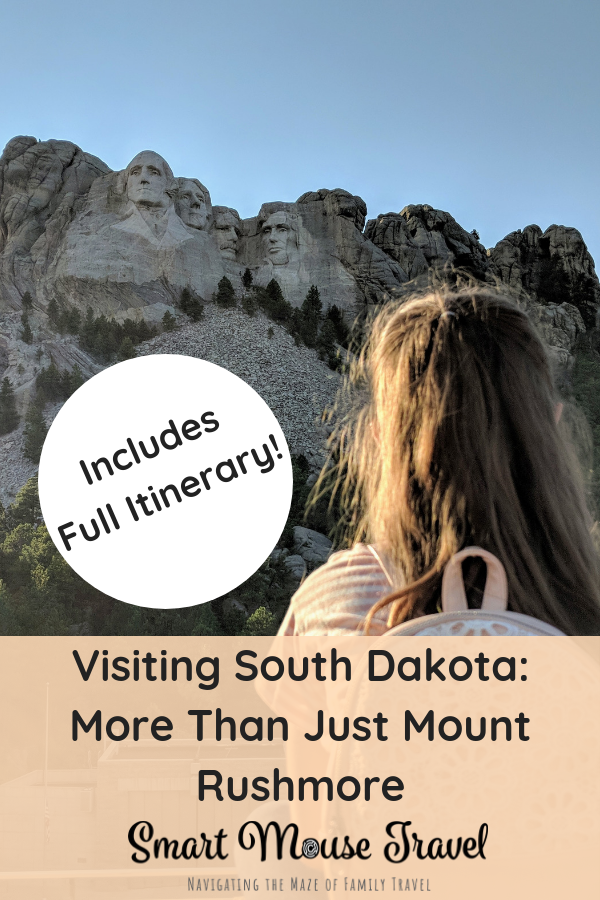