Making the decision on where to spend and where to save on a Disney trip is something I think everyone struggles with during planning. I often get asked if Mickey’s Very Merry Christmas Party is worth the expense. Since visiting Disney World is an expensive vacation it is important to know what you are getting in exchange for an extra paid admission.

Mickey’s Very Merry Christmas Party (MVMCP) is a “hard ticket” event at Magic Kingdom that requires the purchase of an additional party ticket to attend. This event is billed as a way to experience the Magic Kingdom with smaller crowds and some unique experiences in exchange for the extra ticket cost.

The party officially runs from 7pm until midnight, but party ticket holders may enter the Magic Kingdom beginning at 4pm on their party night. Magic Kingdom closes to daytime guests at 6pm on Mickey’s Very Merry Christmas Party nights. 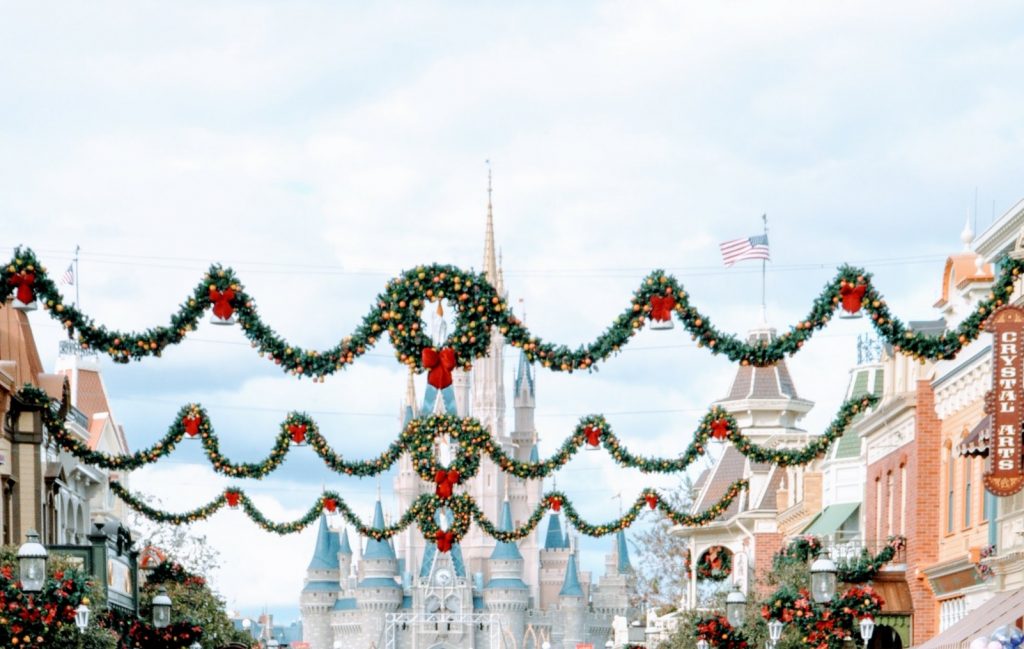 Ticket sales are limited for Mickey’s Very Merry Christmas Party, which means lower overall crowd levels. This is especially true if you are attending a party closer to Christmas Day, as crowds get very intense over Christmas break and in the days leading up to it.

Please note: not all attractions are open on MVMCP nights.

There are several characters you can meet during Mickey’s Very Merry Christmas Party. Most of these are the usual Disney characters, but in their holiday best. However, there are a few special character meet opportunities such as Jack Skellington (as Sandy Claws), Santa, Seven Dwarfs, and Scrooge McDuck.

Although we are character obsessed we generally spend less time on characters at Mickey’s Very Merry Christmas Party than we do at Mickey’s Not-So-Scary Halloween party.

Please note: Some of the character meeting opportunities are rare, and long lines will form even before the official party start. Make sure you plan ahead if this is important to you. Also character options are not guaranteed and available characters may change.

Mickey’s Once Upon a Christmastime Parade 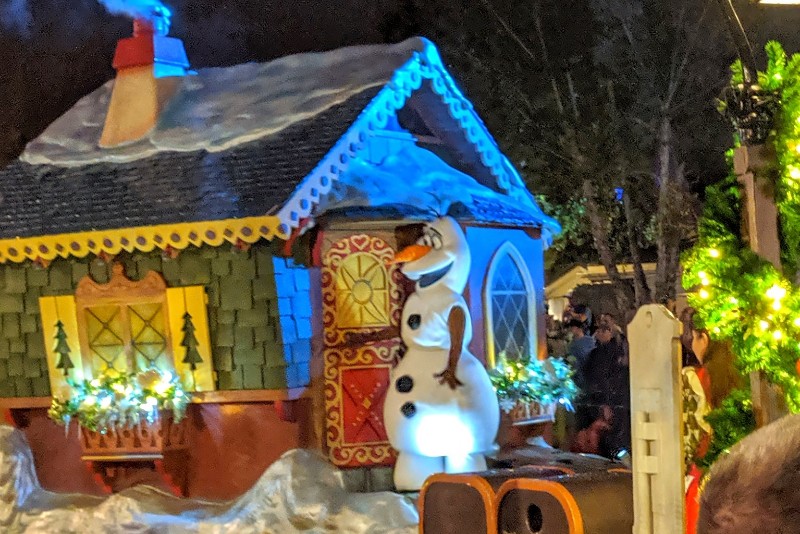 The parade is performed twice a night during Mickey’s Very Merry Christmas Party. I suggest securing a spot an hour or more ahead of the parade time if you want a premium viewing spot. There was light, and later heavy, rain during the first 2019 Mickey’s Very Merry Christmas Party. The first parade stepped off roughly on time as the rain slowed, but the parade can be delayed or changed due to inclement weather. 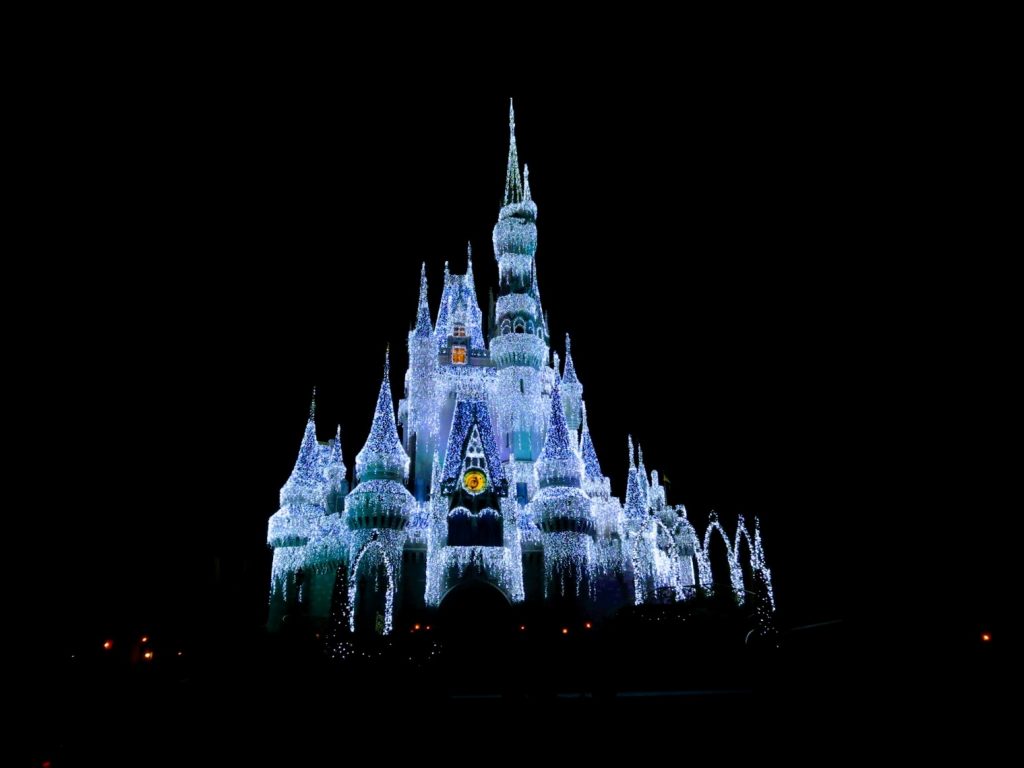 To help the land get into the Christmas spirit, Olaf, Anna, and Kristoff suggest Elsa use her powers turn the castle to ice. The show is very entertaining and culminates in a breathtaking lighting ceremony of Cinderella’s castle.

This castle stage show takes place in front of Cinderella’s castle. The show is about Mickey throwing a fabulous Christmas party with many Disney character guests and a dozen Christmas songs. Mickey’s Most Merriest Celebration, like all castle stage shows, may be cancelled or postponed if it is raining. 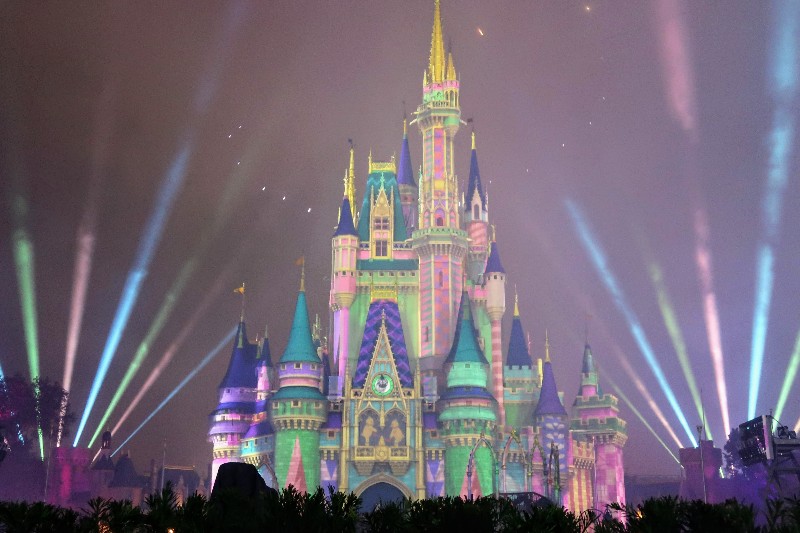 I liked that the fireworks and castle projections for Minnie’s Wonderful Christmastime Fireworks Show are designed to be easily seen from anywhere on Main Street U.S.A. This means you don’t have to set up for a special viewing spot far in advance.

Unfortunately, it was raining heavily during the first Minnie’s Wonderful Christmastime Fireworks Show. The castle projection colors were muted by either rain, firework smoke, or both which is something to be aware of if your party night has inclement weather.

New in 2019 are several holiday ride overlay experiences. An overlay is a special seasonal enhancement of an attraction. 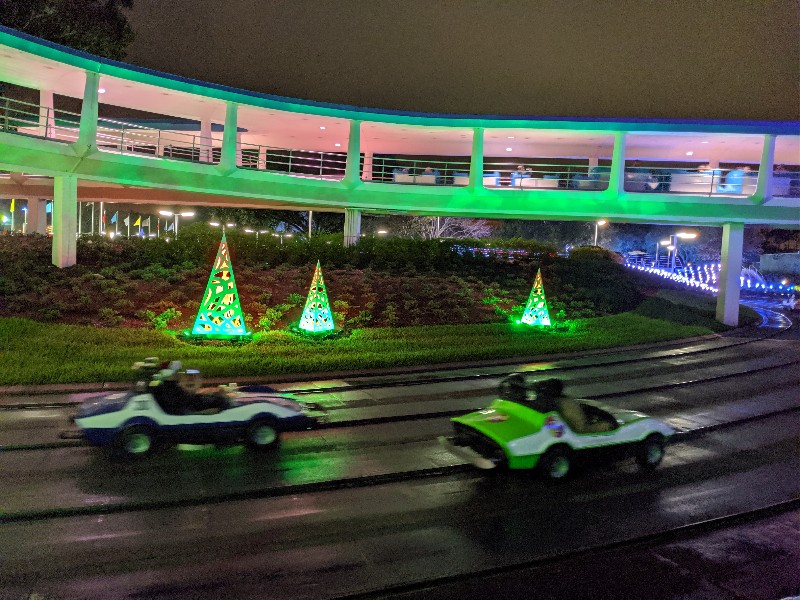 This is the version of Space Mountain I never knew I needed. The track has several areas lit with red, green, or blue lights with a rock inspired Christmas soundtrack. I liked that I could see some of the track and wasn’t as jostled as normal, but it shocked my daughter to see how close the tracks are to each other in certain areas. 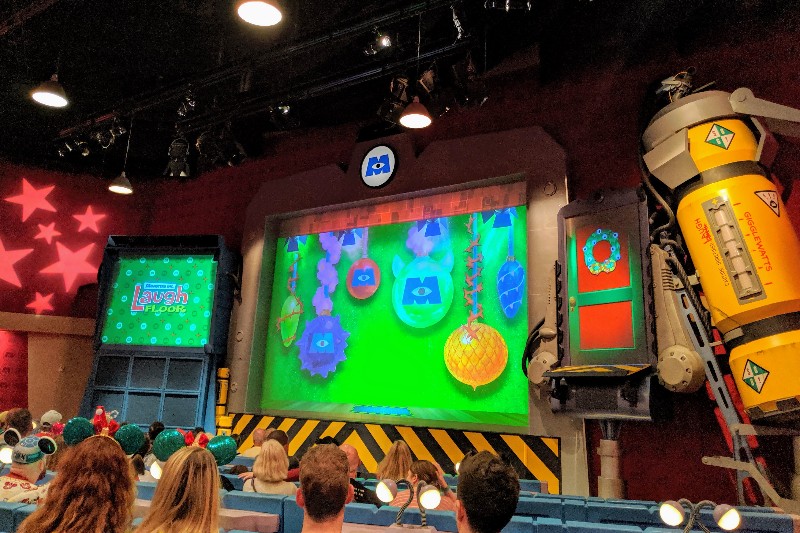 This is the same style comedy show of a normal Monsters, Inc Laugh Floor show, but with seasonal jokes and design. Even Roz gets in the Christmas spirit with a special sweater. We laughed and had a good time at the show, but it isn’t worth rushing to do as part of your party.

The Mad Tea Party gets a different soundtrack and lighting during Mickey’s Very Merry Christmas Party. This overlay was fine, but we like the Halloween overlay better. 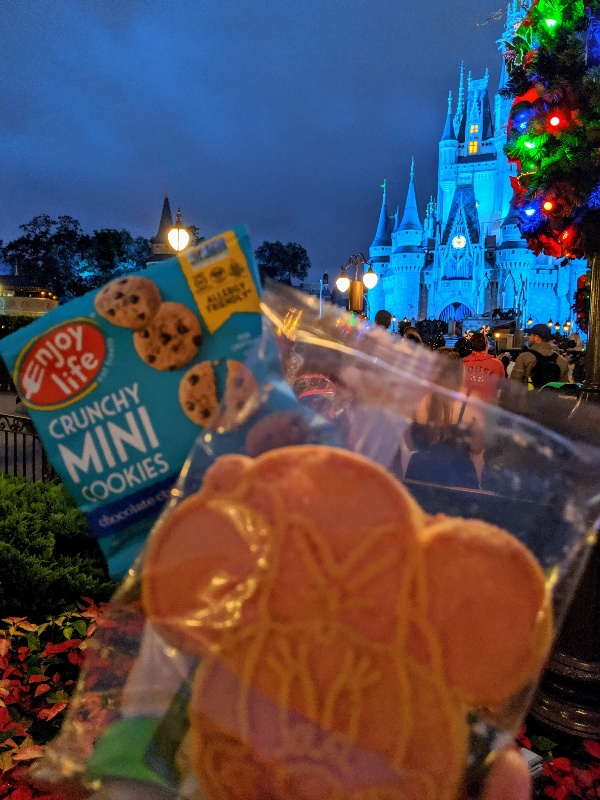 During Mickey’s Very Merry Christmas Party several locations around Magic Kingdom provide free treats.  Elizabeth has a food allergy, so we mostly avoid these stations. However, at the initial cookie handout area just off Main Street they had the option of Enjoy Life cookies which is great for those with food allergies.

Check the Disney website for specific venues and treats available for this year’s event. 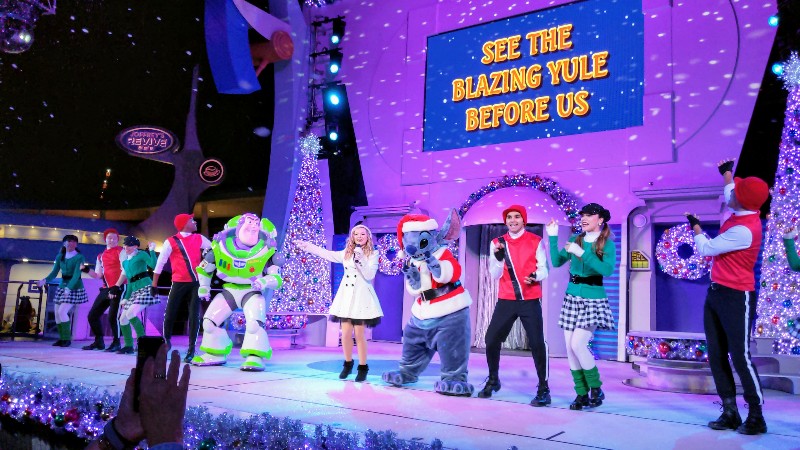 This Christmas themed stage show with characters like Stitch and Buzz Lightyear takes place several times each night during the party.

Can I Stay For Mickey’s Very Merry Christmas Party If I Spend The Day At Magic Kingdom?

The short answer is no. Those who have purchased Mickey’s Very Merry Christmas Party tickets are issued special wristbands to show they are party guests. After 6pm on party nights those without wristbands won’t be allowed to enter queues for rides. Day guests must then make their way to Main Street to exit the park.

A lot of people think that if you spend the day at Magic Kingdom you can sneak into Mickey’s Very Merry Christmas Party, but this is just wishful thinking. Cast members ask to see your wristband as you walk around the park. You will be asked to leave if you do not have the special wristband for that night’s party.

How Do I Get Dining Reservations During Mickey’s Very Merry Christmas Party?

You must have a MVMCP ticket purchased and linked to your account prior to making dinner dining reservations on party nights. We usually opt for an early dinner on party nights. This means we eat during the overlap time of daytime guests finishing the day and party guests arriving.

If getting a reservation for Be Our Guest or Cinderella’s Royal Table is important to you and this is the only time you can get it – go ahead. Otherwise I highly recommend using your party time for things that only occur during the event.

Here is the special link to make dining reservations on party nights.

Find out more about making Disney World dining reservations in my 5 minute guide.

So Is Mickey’s Very Merry Christmas Party Worth The Expense? 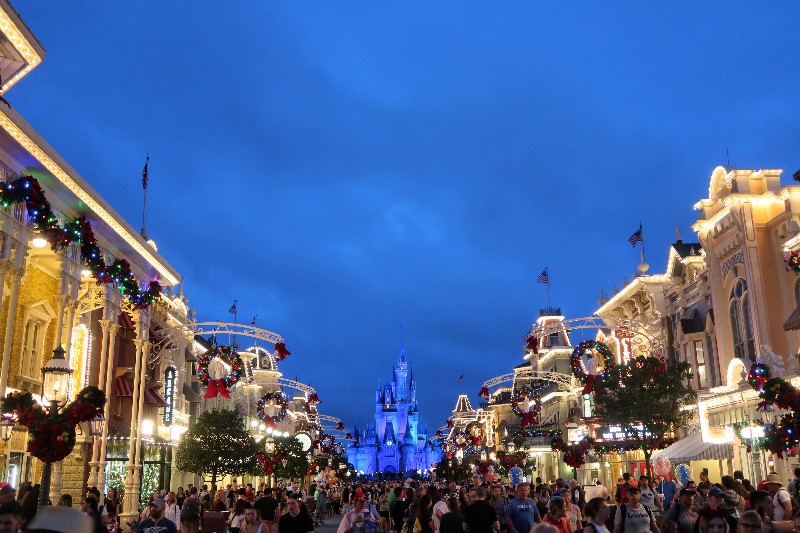 I think if your kids are older, night owls, or live in a time zone where they can easily stay up late at night I say to do it with one caveat. If cost is a concern I would not buy a regular park day admission on your party day.

Instead I would suggest you rest at the hotel, take a tour around some of the on-site Disney World resorts or explore the Disney Springs Christmas Tree Trail. Use this saved money from one fewer park day to offset the cost of Mickey’s Very Merry Christmas Party. Get the most out of the party by arriving at 4pm to start the Christmas fun at Magic Kingdom.

If you have younger kids or the additional cost is a concern then it is okay to skip the party. You can still see all the Magic Kingdom Christmas decorations and A Frozen Holiday Wish castle lighting during a regular park day. Instead watch the regular Magic Kingdom fireworks on a non-party night (still amazing) and take a tour of Christmas decorations at Disney on-site resorts.

To see some more of our favorite Christmas activities at Disney World check out this article. 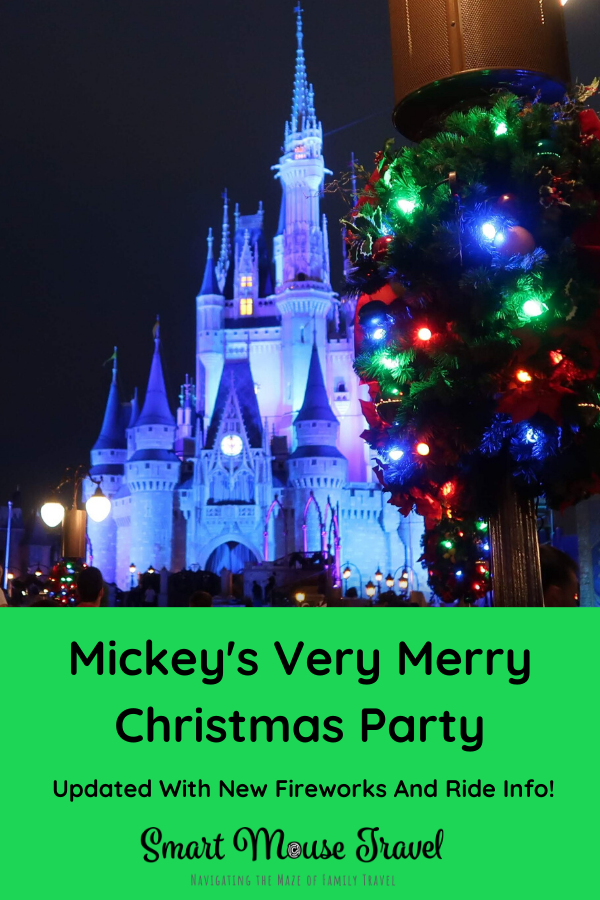 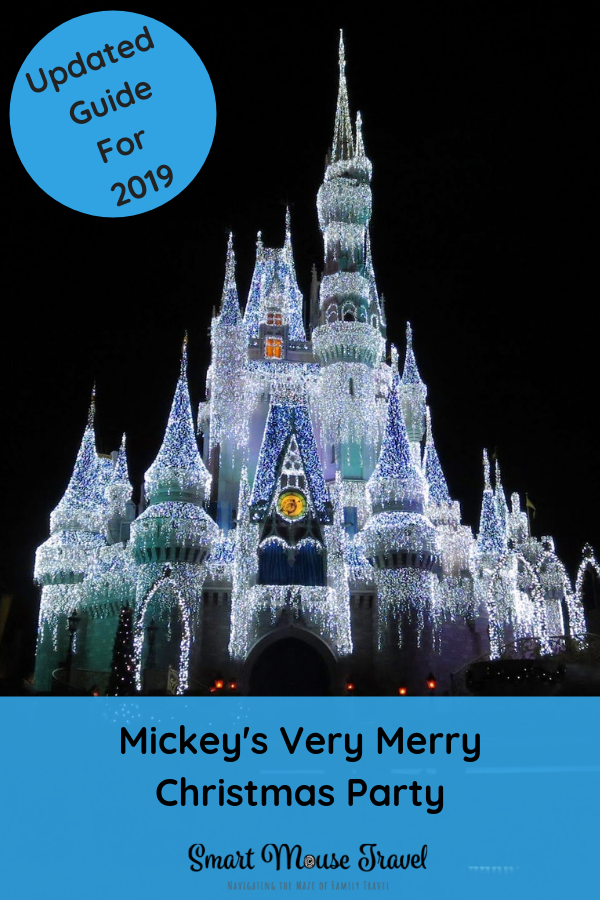 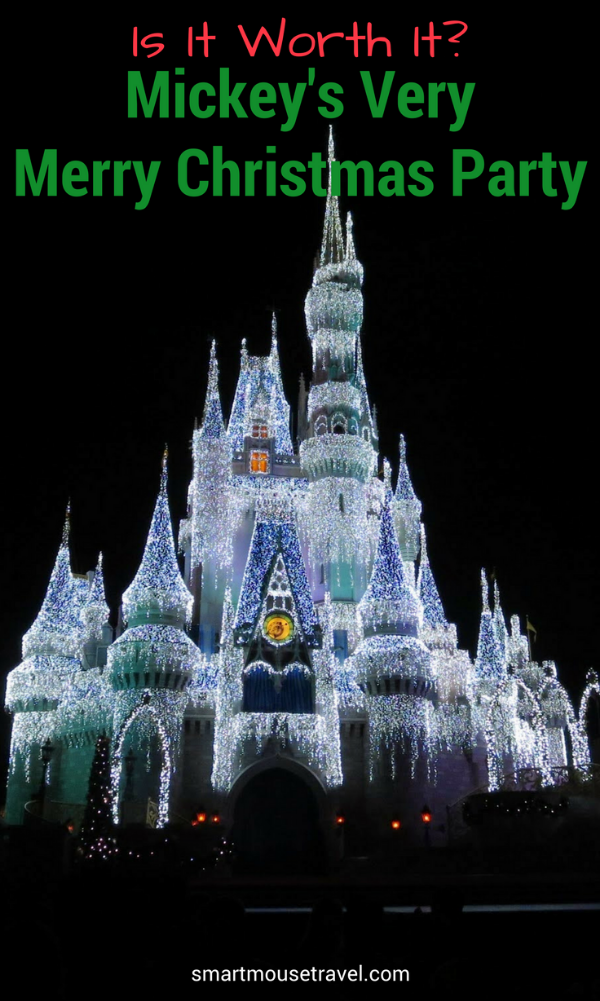 7 thoughts on “Is Mickey’s Very Merry Christmas Party Worth The Expense? (Updated for 2019)”